Cancer is a transformative experience. You ask, “Transformative how?” and I can’t answer in one post. But I can start by catching you up on my story.

I was diagnosed with throat cancer in July of 2020. Thirty-five sessions of radiotherapy followed. Soon after, though, the pain surrounding my tumour began to increase. Several scans and a surgical biopsy confirmed that the cancer was resurgent. Treatment-resistant throat cancer is deadly. My surgeon told me that I had a life expectancy in months, not years. He saw no further treatment options. He wanted to discuss — and I respect his honesty — when and how I wanted to die.

Were there options elsewhere? Dave Fuller, a head and neck cancer specialist at the M. D. Anderson Cancer Center in Houston (MDACC), thought that they might be able to treat me. MDACC has proton beams and surgical robots, technologies that Canada does not use because they do not believe that they are cost-effective. Fuller promised nothing; they needed to see me. It wasn’t clear that MDACC could help me because my tumour was probably inoperable, and it had already shrugged off a lot of radiation. Nevertheless, talking to MDACC seemed to be the only choice on offer.

So at the beginning of May, days after getting my prognosis, my wife and I began driving to Houston. We wedged our dog’s bed into our Toyota Highlander amidst some luggage and put her in it. I was overcome when we left Ottawa. I had committed to Canada and loved the life we had made there. I didn’t expect to see our house again. We didn’t have a place to live or more than a sketch of a plan for getting treatment. And we didn’t have much time. One of us drove while the other worked the phone.

We drove first to Pittsburgh to meet our children. It’s where we raised them, and four of our five have moved back. The border had just reopened, and we had not seen them since the beginning of the pandemic. The closed border also meant that I hadn’t seen them since before my diagnosis. Lots of Zoom and FaceTime, but that goes only so far.

But when we arrived in Pittsburgh, such plans as we had unravelled. Cancer is expensive, and you have to get ‘financial clearance’ before a U.S. hospital agrees to treat you. To get clearance, you need insurance that the hospital accepts. I’m a U.S. citizen, and I had signed up for Medicare when I turned 65. Well, sort of. I had a Medicare card, but I didn’t have the correct letters on it. I had checked the wrong boxes and only had Medicare A, which covers hospital care. Most cancer care is outpatient, and Medicare A will not cover it. The Medicare problem was fixable… but not until July 2022. By then, I would almost certainly be dead. The upshot was that I couldn’t pass financial clearance at MDACC. Or Memorial Sloan Kettering, the Dana Farber, or any of the glittering U.S. cancer centers.

We spent a week with our kids. Then we started driving home. We didn’t talk much about it, but we were going home so I could die in Canada, where end-of-life care would not drain our estate.

And then our luck turned. My friend at MDACC had asked, “Why aren’t you getting treated at the Princess Margaret Hospital (PMH) ?” Princess Who? I didn’t know that the PMH in Toronto is Canada’s leading cancer centre. As we drove north, we made calls to get a consultation there. An appointment came through just as we were passing through Toronto. That meeting connected us to a new medical oncologist in Ottawa. We drove home. We didn’t have a solution yet, but a door had opened that might lead to treatment.

OK, but what treatment? The past year has been a crash course in cancer treatment. Guided by my good friend David States, my wife and I had been reading the immunotherapy literature. Kathi, a physician, found pembrolizumab (trade name, Keytruda), a recent monoclonal antibody. Pembrolizumab, however, wasn’t approved in Ontario for my cancer. It’s easy to understand why: it did nothing for about 80% of recurrent head and neck cancer patients. But what did we have to lose? We paid $9700 Canadian for an initial dose. (One. Dose.) I was able to get on Merck’s compassionate care program for the following two doses. My oncologist appealed the decision not to treat me, and the Ontario Health Insurance Program agreed to pay for it.

And, hallelujah, the stuff seems to be working. A recent CT scan indicated that there had been substantial tumour shrinkage. I appear to be one of the lucky 1 in 5. Will the drug cure me? Unlikely. More likely: I will have a few years until the tumour evolves another way to defeat my immune system. Then the tumour will begin to grow again, and that will be that. 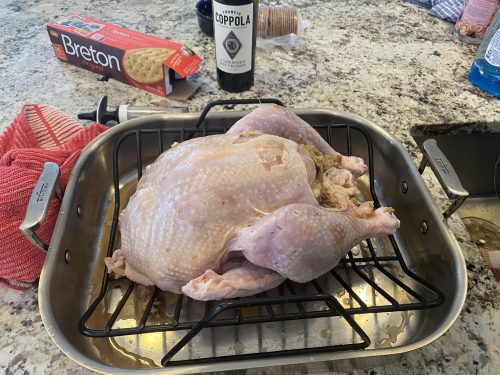 I don’t care. Contrary to expectation, we’re back in our house in Ottawa. This weekend was Canadian Thanksgiving. This is my bourbon-maple turkey, which I served with roasted Brussels sprouts with pearl onions and pancetta, and curried cranberry-apricot sauce. I am wholeheartedly grateful for having more time. I’m tired; cancer has burned the chaff in my life, stripped it to the bones. But I am thankful even for that. I have an intense desire to love as deeply as possible. And to write.