The slowing of US investment in medical research

The US is facing many critical health problems. An aging population means that there is an increasing burden of cancer and other chronic diseases. Novel pathogens such as the Ebola virus, familiar ones like influenza, and multidrug resistant infections pose growing and possibly catastrophic threats. Mental illnesses are enormous sources of disability, yet we have few effective therapies to counter them.

Finally, despite technological leadership in most areas of medicine, the US lags the developed world on many indices of quality of care. Many tens of thousands of Americans die each year from preventable medical errors. In sum, we do a poor job delivering health services.

In light of these problems, you would imagine that the US would have a robust commitment to medical research.

You would be wrong. In JAMA, Hamilton Moses and his colleagues summarize trends in US medical research:

EVIDENCE REVIEW Publicly available data from 1994 to 2012 were compiled showing trends in US and international research funding, productivity, and disease burden by source and industry type. Patents and publications (1981-2011) were evaluated using citation rates and impact factors.

The decline in the rate of growth is clear below. Note that since 2010 there is not just a deceleration but an actual decline in constant dollar investment (see also here). 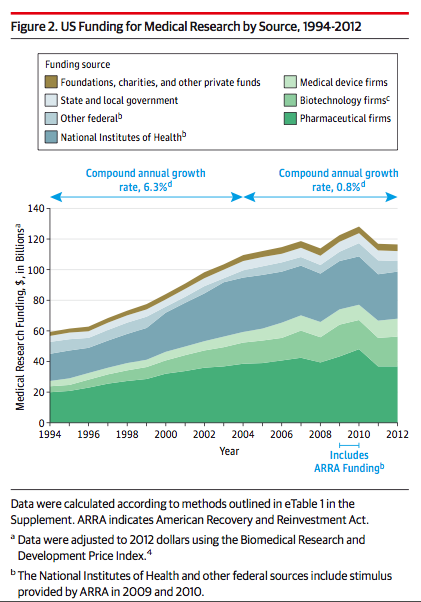 Hamilton and his colleagues are also concerned that the US is losing its leadership in health research.

The decline of the US share in total medical research, however, is a concern only to the degree that the US is doing less than it could. The growth of investment in health research across the rest of the world is only to the good.

But here is the thing that shocked me. The authors looked at what health systems (that is, hospitals and hospital systems) and insurers invest in improving the services they provide. I would have hoped that insurers — who finance health care — and health systems — who deliver care to patients — would have invested significantly in service innovations. This is not the case.

Underfunding of service innovation: Health services research receives $5.0 billion (0.3% of total health care expenditures) or only 1/20th of science funding. Private insurers ranked last (0.04% of revenue) and health systems 19th (0.1% of revenue) among 22 industries in their investment in innovation. An increment of $8 billion to $15 billion yearly would occur if service firms were to reach median research and development funding.

To get a sense of how little health systems (that is, hospitals and larger integrated systems) invest in improving their product, you should know that the median US industry invests about 2% of its revenue in research and development. Health system investment in service innovation is an order of magnitude less than that.

This lack of investment in their product is at variance with the images that health systems present as gleaming centers of research. Those images are correct in that many health systems have impressive research campuses. But those campuses are homes to research in basic science, pharmaceuticals, medical devices, and so on. These things are not the products of a hospital system any more than lawn mowers or jars of pickles are the products of Walmart. The business of the health systems, like Walmart, is to deliver these products. And they aren’t investing much in delivering them better.

Not investing in improving their products would be okay, I suppose, if US health systems were providing services that were safe, easily accessible, and affordable to everyone. But they aren’t.