The antibiotic era is over. And we are cutting health research funding?

The US has significantly cut spending on health research and public health. The sequestration legislation requires that we continue to cut it. Yet there are many life and death problems that urgently require research and public health intervention. One of them is antimicrobial resistance. I want to convey the urgency of this problem, and then point out how ill-advised our current health research funding policies are.

US hospitals and communities are increasingly colonized by bacteria that are highly resistant to antibiotic treatment. Perhaps you were aware of this problem, but thought that it was an issue for the future. But a new CDC report makes clear that this is a serious US health problem, right now. The CDC estimates that more than two million people are sickened and that more than 23,000 Americans die each year of antibiotic resistant infections. Compare that to 15,000 deaths per year from AIDS.

Dr. Arjun Srinivasan, an associate director at the CDC, summarizes where we are this way:

For a long time, there have been newspaper stories and covers of magazines that talked about “The end of antibiotics, question mark?” Well, now I would say you can change the title to “The end of antibiotics, period.” We’re here. We’re in the post-antibiotic era… we are literally in a position of having a patient in a bed who has an infection, something that five years ago even we could have treated, but now we can’t.

CDC Director Dr. Tom Frieden explains that the danger is not just that we will lose the ability to fight infectious diseases. Many other life saving medical interventions depend on antibiotics for their effectiveness.

The loss of effective antibiotics will undermine our ability to… manage the infectious complications common in vulnerable patients undergoing chemotherapy for cancer, dialysis for renal failure, and surgery, especially organ transplantation, for which the ability to treat secondary infections is crucial. When first-line and then second-line antibiotic treatment options are limited by resistance or are unavailable, healthcare providers are forced to use antibiotics that may be more toxic to the patient and frequently more expensive and less effective. Even when alternative treatments exist, research has shown that patients with resistant infections are often much more likely to die, and survivors have significantly longer hospital stays, delayed recuperation, and long-term disability.

Many Americans will at some point in their lives require medical treatments that include concomitant antibiotics. For example, an American has a 44% lifetime risk of developing cancer. Many cancer patients require surgery or chemotherapy regimes that compromise the immune system. If antibiotics lose their efficacy these treatments become increasingly risky.

Why antimicrobial resistance is increasing is well-understood. The pathogens are simply evolving. Applications of antibiotics selectively cull the least resistant organisms, favouring drug-resistant strains in the next bacterial generations. The bacterial populations become increasingly resistant and the antibiotics stop working. The more intensively we use antibiotics, the more rapidly the pathogens evolve.

This means that the current problems will get worse as additional pathogens acquire resistance and currently resistant pathogens acquire new forms of resistance. Moreover, because the underlying problem is evolution, there is likely no definitive solution to the problem of antimicrobial resistance. We take for granted that medical care always improves, because we have never experienced anything else. But Drs. Srinivasan and Frieden are telling us that essential medical interventions are becoming less effective.

The best we can hope for is to keep the pathogens at bay by evolving faster than they do. We are like the Red Queen, forced to run as fast as we can just to stay in the same place. 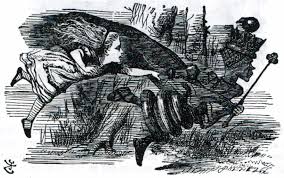 We are not, however, helpless. To keep up with the pathogens, we need to slow the rate of evolution of antimicrobial resistance through responsible use of antibiotics. From the CDC:

up to 50% of all the antibiotics prescribed for people are not needed or are not optimally effective as prescribed. Antibiotics are also commonly used in food animals to prevent, control, and treat disease, and to promote the growth of food-producing animals. The use of antibiotics for promoting growth is not necessary, and the practice should be phased out.

We also need to speed up the rate at which we develop new antibiotics. However, antibiotic development has actually slowed due to many scientific, regulatory, and economic obstacles.

In short, we urgently need policy action and we need science. But in the face of this problem, the US is cutting its scientific research budget. 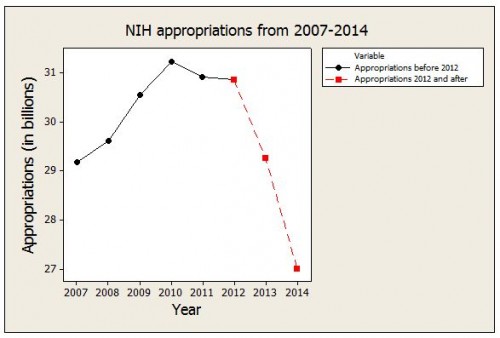 The CDC is being cut by similar amounts.

These cuts are a result of the sequester. Sequestration cuts discretionary federal spending across the board, without regard to the relative priority of different types of spending. Worse, as John McDonough points out, the cuts do not stop in FY2014:

Unless repealed or replaced, sequestration requires $109 billion annually in new federal cuts each year through fiscal year 2021. An important difference in 2014 and beyond is that Congressional appropriators may distribute reductions as they choose, provided that Congress agrees on a budget plan. Without such an agreement, cuts will be across the board, as they have been in FY2013.

I don’t know how to express my feelings about this matter without risk of melodrama, but these cuts are insane. We are slowing down science when we need to speed it up. The sequester will become an issue again this winter, when we face another budget and debt limit crisis. The US must find a way to return to a rational budgeting process that prioritizes our health and wellbeing.