The physical reality of mental illness 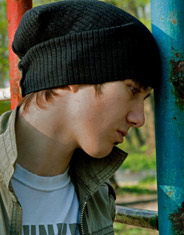 One of the persistent misunderstandings of mental illness was — unfortunately — perfectly expressed in a recent Slate Magazine article. Discussing the Oregon Medicaid Experiment, the headline writer stated that

Apparently the writer believes that ‘Health’ = ‘Physical Health,’ whereas ‘Mental Health’ = ‘Subjective Well-Being.’ This misunderstanding promotes views that physical illness is real and must be treated, whereas the mentally ill… well, they need to suck it up.

It’s true that unlike mental illnesses, some physical illnesses kill you directly by stopping your breathing or your heart. But if you look at the data (for example, here or here) you find that the mentally ill die a lot earlier than those who do not have mental illnesses. 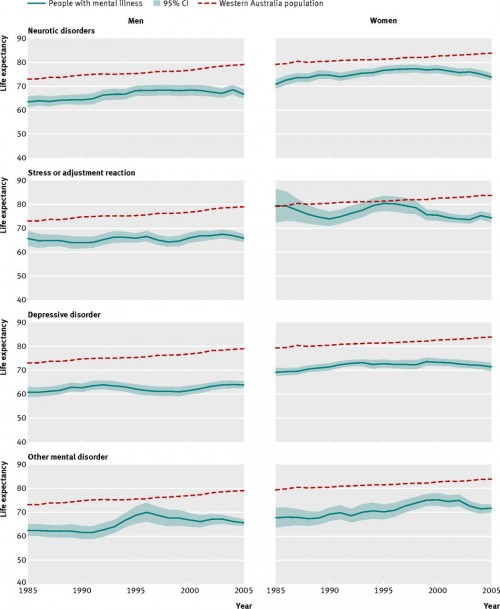 Lawrence et al found that, first, mental illness is associated with a substantial life expectancy loss and, second, this loss is increasing over time.

the size of the gap in life expectancy for people with psychiatric disorders in Western Australia increased between 1985 and 2005, from 13.5 to 15.9 years for males and from 10.4 to 12.0 years for females.

This is big: The mortality difference associated with having a mental illness is comparable to that associated with being a life-long smoker. The reason the gap is growing is that life expectancy is improving among the non-mentally ill but not much among the mentally ill.

The causal story relating mental and physical illness is complex. Each may promote the other and both kinds of illness are promoted by stress and other social determinants of health.

The essential point, however, is that it is a terrible mistake to equate “health” with “physical health.” The unity of the body and mind is not just new age rhetoric. It also points to the comprehensive physical suffering of the mentally ill.