It’s pretty clear where employers are headed for health care cost control: toward greater employee cost sharing, including higher deductibles. According to the 2011 Kaiser/HRET Employer Health Benefits Survey, the percent of workers enrolled in a plan with at least a $2,000 deductible has more than doubled since 2008. 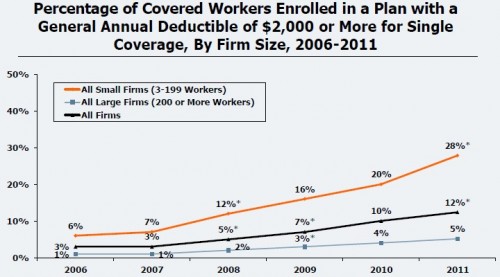 I expect this trend will continue regardless of what theoretical underpinnings might (or might not) justify it. Employers can’t simply pay for any and all  increases in premiums. They especially cannot when the Cadillac tax adds a surcharge to high-premium plans in 2018. Their only choice is to pass the costs on to employees. However, this trend does comport with the consumer-directed paradigm and, thereby, can be justified on some logic of emergence in a disaggregated market.

This is, in some sense, the opposite of what happened in the 1990s. Then, under the managed care paradigm, consumers were not at the center of health care decisions. Those decisions were, instead, made at a higher level of aggregation: the HMO. If the 1990s were the grand test of HMOs, the 2010s may be that for consumer-directed health plans (CDHPs).

James Robinson and Paul Ginsberg [1] note that the experiment will not be a clean one. Manged care still exists. Though the most extreme, overt, gate keeper style rationing of 1990s managed care have been tempered, some vestiges of it still remain: network contracting and chronic care management, for example. Indeed, these and other functions of health plans and their sponsors are needed and likely demanded by consumers. It’s an explanation as to why we don’t see consumer-driven health care in its purest form. Robinson and Ginsberg:

Individual consumers can benefit from some of the efforts by governmental and employer sponsors, health insurance plans, provider organizations, and medical management programs. Consumers need others to create meaningful products and processes from which they can choose. […]

The blind spot in the consumer-driven analysis of market performance concerns the importance of coordination in insurance, delivery, and sponsorship. The obdurate insistence on á la carte choice and retail purchasing pushed the theorists of consumerism into positing organizational and market dynamics that have not been observed in the real world. The important issue is not, however, the current status and structure of health care and health insurance but the trend into the future. It seems safe to say that insurance product design will continue to move toward consumer-driven elements and that managed care elements will be recrafted into forms in which consumers choose but are subject to incentives structured by insurers.

Yet, shifting more costs to consumers may, paradoxically, drive them toward more managed care, not for the management (which they have no inherent reason to enjoy) but for the lower prices (which their stagnant wages may require). Thus, the “empowered” consumer may feel compelled to choose the very type of distasteful insurance to which consumer-directeness was the response.

There’s another perspective to consider. To do so, it’s instructive to return to the late 1990s HMO backlash.  Matt Yglesias is right that “this whole episode in American life is, in my view, under-discussed.” He continues,

After all, the HMOs were supposed to reduce cost. And the HMOs worked. But people have spent the past ten years voting with their feet away from this option. […] People seem to quite authentically prefer, in the circumstances of 21st century America, to spend a large share of their marginal dollar on health care services.

It certainly seems that way. But for every consumer of health care there is a provider, and both participated in the HMO backlash. David Mechanic [2] reminds us that much of the cost control of 1990s managed care came in the form of lower payment rates for hospitals, doctors, and other providers of health services and goods. Additionally, utilization reviews imposed other costs on practitioners. To put it bluntly, health care providers hated managed care as much or more than consumers.

Health organizations mobilized their media resources against managed care, as did many advocacy groups who feared restrictions on services. […] The media and opponents of managed care had no need to present a balanced picture of the empirical evidence. Opponents and advocates, of course, are selective and seek to make a persuasive case. Journalists may not have similar motivation, but they seek good, compelling stories, and powerful health plans motivated by profit allegedly denying services to a sick child or a cancer patient is a more compelling story than one that reports few differences in overall performance.

Since patients have greater trust in and sympathy for those providing care than those with the power to deny coverage for it, this was not a fair fight. Whatever reservations consumers had about managed care, it was leveraged, amplified, and exploited by those with the power, money, and motivation to do so.

In terms of cost control, managed care worked. Maybe it worked too well, fueling the fire that consumed it. Will the consumer-directed paradigm suffer the same fate? The history of health care cost control is that nothing works, or not for long anyway. The optics of high deductible health plans won’t be aided by the possibility that they may lead to increased rates of premium growth. Don’t be surprised if ratcheting up deductibles which, in turn, leads to lower health care utilization and provider revenue, succeeds to the point of failure too.