Aon Hewitt’s 2011 Health Insurance Trend Driver Survey explained something I had not considered before: “deductible leveraging.” That’s the term for a phenomenon that can cause high deductible health plans to have greater relative increases in premiums than plans with lower deductibles. This is counter-intuitive. Here’s an example from the report:

I simulated this in Excel using the numbers in the above example. I imagined that the procedure continues to increase in costs at the rate given (6% per year) and the deductibles never change. I also imagined, without loss of generality, that the cost to the plan for this procedure is the full premium. (By changing wording, one can make this seem like less of a leap because, in fact, for illustrative purposes–which is all I’m using it for–it is not a leap at all.) 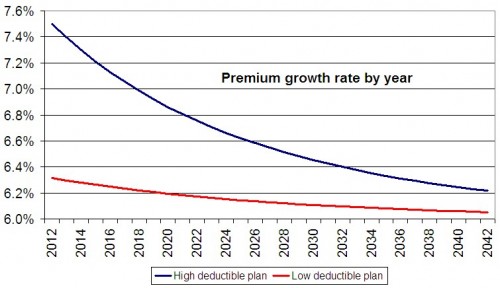 This is just math, so there’s no normative conclusion to draw from it. But the math does suggest a problem. People in high deductible health plans may wonder why their health insurance premiums are going up faster than their counterparts with lower deductible coverage. The result is sufficiently counter-intuitive that few are going to understand. I expect people will feel like they’re being cheated, that health plans are ripping them off. They joined high deductible plans for low premiums only to find higher premium growth. They may suspect a bait and switch. Worse, the difference in growth rates is largest right at the start, when people are forming their opinions of their experience.

This all presumes people actually observe the differential premium growth. A lot depends on what employers do. If they average across offered products so everyone in the firm experiences the same growth rate, deductible leveraging will be unobservable to employees. On the other hand, organizations conducting surveys (like the Kaiser/HRET employer survey) may illuminate differential growth rates. The media may notice, report the phenomenon, and fuel disappointment in high deductible health plans.

This is a math problem that may have public relations consequences.