GOP Medicare privatization plan is like employer-sponsored insurance. And that’s not a good thing.

This Sunday on “Face the Nation,” Rep. Eric Cantor told host Harry Smith that the GOP’s Medicare voucher plan is much like employer-sponsored health insurance. (See the exchange around the fourth minute of the online video, h/t @TPHealth.) This is the latest in a series of comparisons of the voucher plan to other types of insurance programs. Unlike the other comparisons, however, this one is apt, though perhaps not in a way Cantor intended.

Under the Republican plan, promoted by Rep. Paul Ryan and passed by the House in April, traditional Medicare would cease to be an option for all who would become eligible beginning in 2022. Instead, beneficiaries would receive vouchers to purchase private coverage. The size of those vouchers would be indexed to general inflation, which is far below the escalation of health-care costs. The CBO has predicted that beneficiaries’ premium burden would nearly triple by 2030 (pdf).

Don’t worry, proponents of the plan say, it’s just like other insurance programs we’re familiar with, that many people like.

First, comparisons were made between the voucherization scheme and the subsidized exchange coverage to be available under the Affordable Care Act. But the ACA’s subsidies are linked to the cost of care, not pegged to overall inflation, so this comparison fails.* Ryan and others have said the plan is just like the Federal Employees Health Benefits program. It isn’t. Government contributions to FEHBP rise with premiums. Finally, Cantor and Ryan, among others, have claimed the GOP’s Medicare plan is akin to the current Medicare prescription drug program, Part D. Wrong again and for similar reasons.

So, what is the Medicare voucher plan like, if anything?

Cantor offered a new comparison: that the Republican plan for Medicare will turn it into something resembling the coverage non-elderly workers and their families receive from employers. Actually, when it comes to consumer affordability, this analogy works far better than the prior ones.

Employer-sponsored premiums have grown rapidly, financed by dollars that would have otherwise gone toward wages. The following chart from the Kaiser Family Foundation illustrates how employer-sponsored health insurance premiums and worker contributions toward them have increased much faster than inflation or wages. 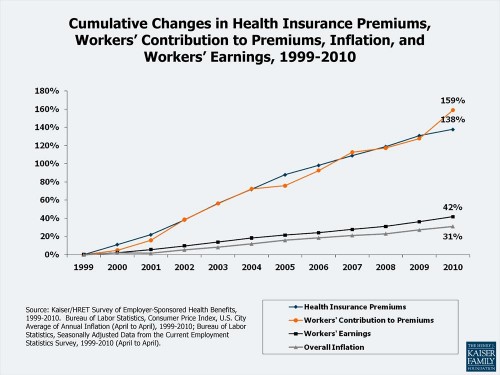 The chart shows that premiums are consuming a larger portion of workers’ resources. For many, they’re becoming unaffordable. That’s exactly what will happen to beneficiaries under the Republican plan for Medicare.

Finally, the GOP has offered a sound analogy. I agree there is a key resemblance between the voucher plan Ryan promoted and employer-based coverage, a resemblance lacking in comparison to the ACA’s exchanges, FEHBP and Medicare Part D. The resemblance is that premiums are rapidly outpacing individuals’ ability to pay for them.

Make no mistake, the Republican plan for Medicare ends it. First, it removes the overwhelmingly popular public option (traditional Medicare), replacing it with private plan-based coverage. Then, support for that coverage would erode so beneficiaries would bear more of the cost of care. In time, the government’s role will become so small as to be meaningless.

In sum, this is a radical departure from Medicare as we know it. Attempting to solve Medicare’s problems by phasing out the program, as the GOP plan would, puts the burden of those costs where it can do the most damage, on a population most in need of health care. In consuming a greater share of personal resources, the plan may be like employer-sponsored insurance, but that’s not a feature even if it’s by design. It’s really a bug.