As Physicians Change, Will the AMA?

This is a cross-post from Ezra Klein’s blog, where Austin and I are guest-blogging this week.

There was a fascinating piece in the NYT yesterday that discussed the apparent shift in politics among physicians:

Doctors were once overwhelmingly male and usually owned their own practices. They generally favored lower taxes and regularly fought lawyers to restrict patient lawsuits. Ronald Reagan came to national political prominence in part by railing against “socialized medicine” on doctors’ behalf.

But doctors are changing. They are abandoning their own practices and taking salaried jobs in hospitals, particularly in the North, but increasingly in the South as well. Half of all younger doctors are women, and that share is likely to grow.

There are no national surveys that track doctors’ political leanings, but as more doctors move from business owner to shift worker, their historic alliance with the Republican Party is weakening from Maine as well as South Dakota, Arizona and Oregon, according to doctors’ advocates in those and other states.

When I was a fellow, back at the turn of the century, a colleague and I conducted a national survey of physicians to determine their level of support for national health insurance. At the time, I was sure physicians would oppose it en masse. Surprisingly, they did not – at least not to the levels that I had thought they might.

In 2007, we repeated the survey to see if opinions had changed. I grant you that this is not a pure tracking survey of doctor’s political leanings, but it does provide some insight on how physicians’ leanings on this one issue changed: 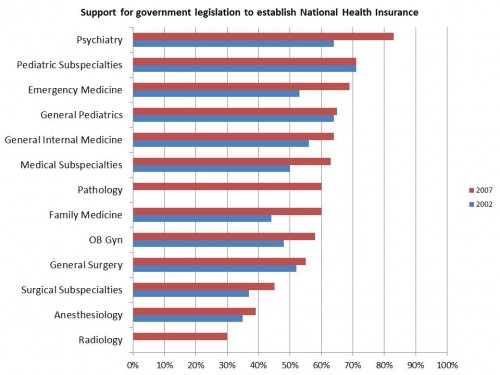 Remember this was support for federal legislation to establish National Health Insurance. That’s far more radical than the PPACA.  And 59% of physicians supported it.  That was an increase of 10% from what we found 5 years earlier, and it was statistically significant.  More than half the respondents from every medical specialty supported it, with the exception of surgical subspecialties, anesthesiologists, and radiologists.  That means support included a majority of general surgeons, of medical subspecialists, and of obstetricians/gynecologists.

Most significantly, in pretty much every specialty we measured in both years, support went up from 2002 to 2007.

I think that demographics likely play a part in this. I also think that this is a potential problem for the American Medical Association.

An unpublished part of our analysis showed that members of the AMA were significantly less likely to support national health insurance than were non-members. Moreover, AMA members were not like other physicians; they were more likely to be older, male, and surgical subspecialists.

While still regarded as the “voice of physicians”, less than 30% of physicians are actually AMA members. And, as we see from above, it’s not a random sample.

The AMA has, at times, been slow to react to changes.  For instance, in 1921, Congress sought to provide funding to reduce maternal and infant mortality through The Sheppard-Towner Act.  The AMA fiercely opposed this piece of legislation.  In defiance to what many saw as an organization that was not promoting the welfare of children, a group of motivated pediatricians separated from the pack and formed a new group, the American Academy of Pediatrics.  Today the AMA is, of course, a strong supporter of efforts to reduce maternal and infant mortality. Perhaps if they had adapted faster, pediatricians would still play a larger part in the AMA.

We’ll never know for sure, but I think it’s possible that the about-face that the AMA made in support of the PPACA, after strenuously opposing health care reform in the past, was due to recognition of the changing positions of physicians. I remember hearing many anecdotes of doctors vigorously opposed to the law, but a large survey conducted in 2009 showed that physicians, as a group, supported progressive elements of health care reform that were eventually dropped.

At some point, the AMA has to decide whether to represent physicians, or represent its members. I think that in the last few years, the AMA has tried harder to do the former. I think that they decided to adapt, and widen their tent, lest they risk alienating a majority of physicians on this issue. Whether they can continue to adapt, and maintain their influence in the face of changing demographics, remains to be seen.