Prerequisite: read part 1. In it, I note that Morrisey’s book on cost shifting includes something none of the other work on the subject does, a very clear, graphical depiction of cost shifting (or lack thereof, really) under a profit maximization hypothesis. In the prior post and this one, I’m going through that theory. Readers should keep in mind that this is theory, not a full description of reality. I don’t believe all hospitals maximize profits all the time any more than you do. However, if and when they do, this theory is illustrative of what one can expect in terms of cost shifting. Also, all figures and quoted passages below are from Morrisey’s book. The rest is my own rewriting/rephrasing of his words.

Everyone who knows anything about hospitals in America will tell you that privately insured payers pay more than average cost and government payers pay less. Is this cost shifting? Not as economists define it, provided we’re assuming profit maximizing behavior. I’ll explain, following Morrisey, using the figure below. It is similar to those presented in part 1 but includes an average cost curve. 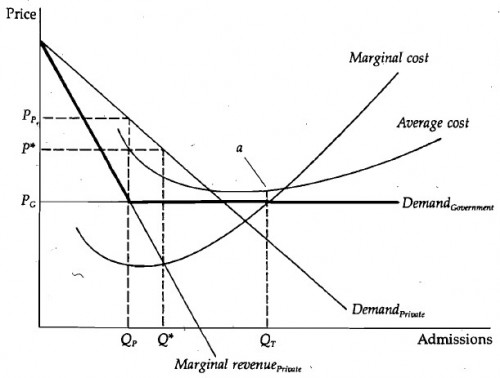 Costs are understood to be facility-wide average costs, which are necessarily determined at the total output of the hospital. This is the point “a” on the average cost curve corresponding to QT. Notice that average costs exceed the price the government pays at this point. Notice too, that the private price exceeds this average cost.

But the profit-maximizing hospital is not losing money on government patients. The marginal cost curve reflects the additional costs of providing care. In this instance government-sponsored patients generate enough money to cover the marginal costs of treating them and also make a contribution to the fixed costs of the hospital.

This might seem incorrect if you’ve got the typical textbook example of a monopolist in your head. A monopolist sells in a single market at a single price, and that price must exceed average cost or the monopolist would go out of business. Our case is different because there are multiple buyers with different degrees of price sensitivity, i.e. demand curves of different slopes. Consequently, they pay different prices. Through price discrimination, in which some payers pay less than average costs, the hospital can cover long-run costs and generate greater profit.

To see this, consider what would happen if the hospital decided to stop providing care to government-sponsored patients. It would staff fewer beds and shift some capacity to the private market. This extra capacity could only be sold at a lower price. As drawn in [the figure] this implies selling Q, private admissions at price P*. This solution maximizes the single-market profit. However, the hospital necessarily makes less profit than in the two-market case. It gives up all of the government cases, each of which generated revenue greater than marginal costs, and it replaces some of the government volume with private patients who generate less marginal revenue than did the government patients. Depending on the extent of the fixed costs, it is even possible to construct a case in which the absence of government patients causes the hospital to close. In such a case the partial contribution to fixed costs made by the government payers, together with the high price to the private payers, would have been just enough to make it worthwhile for the hospital to continue operations. When the hospital stopped providing services to the government patients it was no longer able to cover long-run costs. […]

It is important to note that this view of hospital costs is consistent with many of the statements of those who assert that cost shifting occurs. The government payers are not covering the full costs of their patients. But the perspective one takes on this observation depends upon where one stands. Yes, the government payers are not paying the full costs; however, if the private payers suddenly ceased to exist, the hospital would continue to provide care to government patients and would seek to provide care to more of them. It would do so until it could get out of its long-term contracts.

All of the above, and that of the prior post, relies on a profit maximization assumption. This is not a realistic assumption, though many economists are loath to give it up. I’ll provide a graphical illustration of hospital operations without such an assumption in tomorrow’s post. We’ll see that cost shifting can occur in that case, but it isn’t the only response to lower government payment.