Morrisey’s book includes something none of the other work referenced above does, a very clear, graphical depiction of cost shifting (or lack thereof, really) under a profit maximization hypothesis. In this and a subsequent post I’ll go through that theory. Readers should keep in mind that this is theory, not a full description of reality. I don’t believe all hospitals maximize profits all the time any more than you do. However, if and when they do, this theory is illustrative of what one can expect in terms of cost shifting. Also, all figures and quoted passages below are from Morrisey’s book. The rest is my own rewriting/rephrasing of his words.

Let’s begin with the following figure, which I will describe at length. 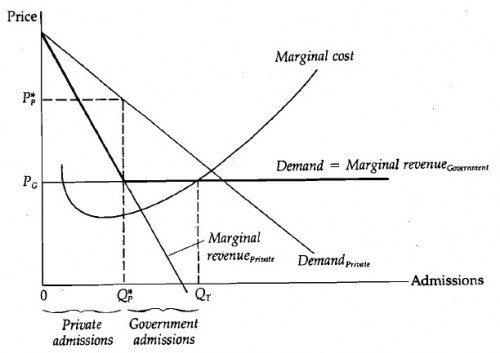 The government price, PG, is fixed and a hospital can admit all the patients it wishes at that price and no other. Hence, PG is also the marginal revenue for government-financed patients. In contrast, private payers (i.e., all non-government payers, including those with private insurance) have a downward sloping demand curve labeled DemandPrivate. As the private price declines more private patients will visit the hospital, but each one that does so generates less marginal revenue, as illustrated by the Marginal revenuePrivate line. Private and government patients are equally costly, and more patients of either type results in higher service costs, so the marginal cost curve is eventually upward sloping.

[The hospital] maximizes profits by producing QT admissions. This is where the envelope of marginal revenue equals marginal cost. [It] then distributes the capacity across the payer categories by setting the price in the private market. Privately insured patients will get QP admissions and will have to pay price PP. The government patients will get QT minus QP admissions at the PG price.

Notice that the hospital charges different prices to the two different types of payers. That’s (third-degree) price discrimination. This is not cost shifting in the sense economists define it (reduction in the public price causing an increase in the private one). Price discrimination arises because the two payers have differently sloped demand curves. In particular, private payers’ demand curve is downward sloping, reflecting the fact that the hospital has some degree of market power. It can raise prices to private payers without losing all of them.

The essence of the cost shifting argument is that when the government lowers its price, the private price rises in response. How would a profit-maximizing hospital really respond? The following figure illustrates, as described in words below. 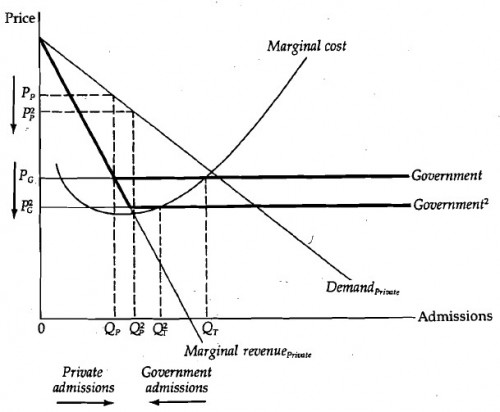 If the government sets a lower price per admission some of the hospital’s government admissions will cost more than the revenue they generate. A profit-maximizing hospital would therefore reduce the number of admissions available to government patients and shift some of the capacity over to the private market. The private market will buy more only if the price is reduced. This is the antithesis of cost shifting. Private prices go down as government prices do. You can follow the logic graphically in the figure just above. The new profit-maximizing prices and quantities have a superscript 2, associated with the lower government payment, which is also so superscripted.

Thus, a self-respecting, profit-maximizing hospital with market power will respond to a cut in the government payment level by lowering the price to private payers. […]

An astute reader will have noticed that the foregoing analysis paid no attention to average cost, only to marginal cost. The former can exceed the latter, and in order to stay financially afloat a hospital must cover its full costs, not just its marginal costs. So, some might wonder if there is still room for a cost shifting story within the profit-maximizing framework if we consider average costs. Actually, there isn’t, and I’ll illustrate that in tomorrow’s post.