The value of health care

In their first paragraph, Murphy and Topel [1] (ungated PDF) hit readers with a stunning fact: “In 1900, nearly 18 percent of males born in the United States died before their first birthday; today, cumulative mortality does not reach 18 percent until age 62.” That’s just one of many ways to illustrate the impressive gains in longevity achieved in the 20th century, due to improvements in public health and medical care.

Even though medical care can only claim credit for a fraction of the gains in longevity, it’s a substantial fraction, if you believe David Cutler and colleagues. Even at the high prices we in the US pay for care, Cutler et al. argue that the benefits have been worth it. This is the principal message of Cutler’s book Your Money or Your Life [2]. Hall and Jones [3] (ungated PDF here) argue that health care is so valuable, we should expend a greater portion of our wealth on it as our wealth increases. Allocating 30% in 2050 of our GDP to health care would not be unreasonable, according to their estimates.

This sets up a key question, just how much should we be willing to pay for the longevity gains provided by health care? According to Murphy and Topel, a lot.

Reductions in mortality from 1970 to 2000 had an (uncounted) economic value to the 2000 U.S. population of about $3.2 trillion per year. Cumulative longevity gains during the twentieth century were worth about $1.3 million per person to the representative member of the 2000 U.S. population. Valued at the date they occurred, the production of longevity-related “health capital” would raise estimates of per capita output in the United States by from 10 to 50 percent, depending on the time period in question.

Prospectively, even modest progress against diseases such as cancer and heart disease would have enormous social values. A 1 percent reduction in mortality from cancer or heart disease would be worth nearly $500 billion to current and future Americans. 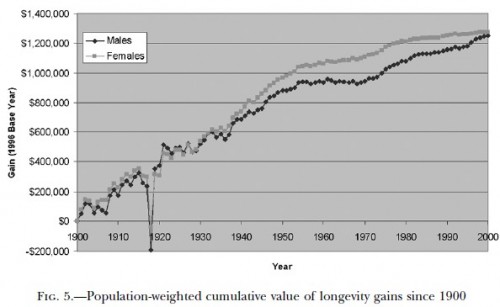 With benefits this large, it would seem, therefore, that we should be investing a lot in health care technology. And, indeed, we are.

But hold on. We can’t actually tell from any of this whether we’re investing too little, too much, or the right amount in the health sector. Any such claim is in the realm of allocative efficiency, about which I wrote yesterday, using a chart from Chandra and Skinner [4] (ungated PDF here). Even though health care investments have returned great value on average (even value above cost), that does not mean that investment today, at the margin, is efficient. Some investments might be, some might not. Moreover, there is tremendous inframarginal waste in health care. That’s just another way of saying that the sector is not productively efficient and, hence, we cannot assess allocative efficiency. It could be that we should spend our marginal dollar elsewhere. We don’t know.

Look at it this way: There is no question purchase of shelter is valuable and worth the price, in general. That does not itself mean that adding another bedroom to your house is worth it. It would not be if you were simultaneously starving. It would not be if your kitchen no longer functioned. Thus, though past health spending can be credited with tremendous value that is worth what we paid, it does not follow that we should spend our next dollar on health care. Nor does it follow that we should not.