It’s been a great century

Sure, the century could have been better and the next one could be even better still, but it is remarkable how far we’ve come. The figures for the chart below and the quotes that follow it are from Rick Mayes’ and Thomas Oliver’s JHPPL paper Chronic Disease and the Shifting Focus of Public Health: Is Prevention Still a Political Lightweight?. 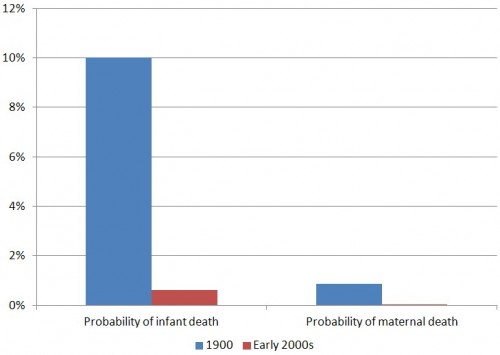 Yes, the early 2000s probability of maternal death is there, it’s just so small that you can hardly see it. In addition to these impressive gains, life expectancy rose from 50 to 78 years over the century. Leading causes of death in 1900 were pneumonia, influenza, diarrhea, injuries, and cancer, in that order. Today they are cancer, heart disease, stroke, emphysema, and injuries. All these changes are largely due to great strides in public health.

The successes in reducing child mortality rates and increasing life expectancy in most parts of the world over the last century were due far more to public health programs and investments than to the investments and advances in curative medicine, impressive as they have been.

Yet we are not investing much in public health these days. Why not?

But why do public health professionals and agencies […] still lack reliable public support and resources to address the coming health and financial threats associated with chronic illness and disability?

That’s what the paper is about. In case you don’t have access to it, here’s the short version of the authors’ answer:

It isn’t always about life and death, is it? No. Sometimes it’s about power, money, and values. Yet they kill just as surely. It’s a trade-off we infrequently recognize or even can bear to face.