There’s consensus about how much the ACA is expected to reduce employer-sponsored insurance (Spoiler: not much)

A new paper in Health Affairs by Thomas Buchmueller, Colleen Carey, and Helen Levy finds (again) that  the aggregate impact of health reform on offers of employer-sponsored insurance is likely to be small.

The piece handily summarizes research to date on the projected impact of the ACA on the ESI question: though the methodologies and time horizons vary between studies, none project a net loss of more than 2% (refer to the figures highlighted in green, below). RAND actually predicts an overall increase in employer-sponsored plans, which is what was observed in Massachusetts. 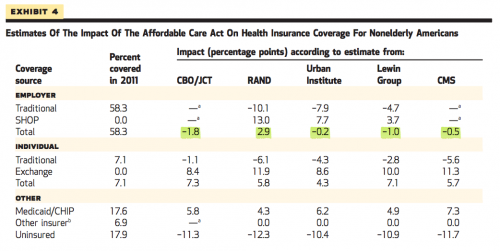 The microsimulations do anticipate that some employers (though far from a majority) will drop health benefits. It seems likely that the “loss” could be concentrated among low-wage workers, who stand to benefit from compensatory wages—economists agree that there’s a near dollar-for-dollar tradeoff between income and insurance—plus subsidies to shop on the exchange. The flip side is that more small businesses will offer coverage through the SHOP, which allows them to combine risk pools across employers. Projections for those two shifts come close to canceling each other out.

If we are wrong, though, how will we know? Inevitably, reports will come in that some employers are dropping coverage. Although it will be tempting to attribute such reported changes to the Affordable Care Act, it is important to interpret new data on employer-sponsored coverage in the context of the basic economics of firms’ behavior and preexisting trends. The combination of rising health care costs and stagnant earnings for middle-income workers has for decades led to a gradual but steady decline in employer-sponsored insurance. This trend is the appropriate baseline against which to measure the impact of health reform.

It’s hard to overstate the importance of that last bit. We expect rates of employer-sponsored insurance to trend downward, independent of Obamacare. They’ve been doing that for years, but now the ACA provides a politically convenient scapegoat.

The models cited generally don’t account for the recent delay in the employer mandate, meaning projected impacts are likely to be attenuated for 2014. I had a chance to chat with Thomas Buchmueller about the study, and he suggested that we might also observe status quo bias after that—employers continuing what they do now, because it’s what they know.

Another thing to keep in mind, lest the economists accuse me of favoring ESI:

Given the historical importance of employer-sponsored insurance, the attention that is paid to this question is understandable. However, it is not a question of great economic significance. There is no efficiency argument for preferring private insurance facilitated by employers to private insurance facilitated by the state or any other mechanism that could be used to pool risk and achieve administrative economies of scale.

It is also important to remember that relying on firms as a mechanism for pooling insurance risk generates efficiency costs because it distorts the labor market. A better-functioning individual health insurance market has the potential to improve labor-market efficiency by reducing job lock, and thus eliminating a barrier to entrepreneurship and making it easier for workers to find a job and an insurance plan that matches their preferences. If the shift from employer-sponsored insurance to individual coverage is greater than projected, these labor-market gains may be substantial.