Employer offers in Massachusetts are up

In the comments to a post last week, we had a vigorous discussion about the future of employer-sponsored health insurance as the main provisions of the ACA go into effect. It may disappoint some readers that I’m not going to go through all possible angles and issues relevant to that in this post. What I’m going to do (mostly) is return to what’s happening in Massachusetts on employer offers. (A few other tidbits are included at the end.)

Before I do, let me acknowledge several things:

Having said all that, there seems to be good evidence that employers in Massachusetts are not abandoning their offer of health care coverage. Page 6 of a July 2011 release of a state report on the 2010 Massachusetts Employer Survey includes this chart: 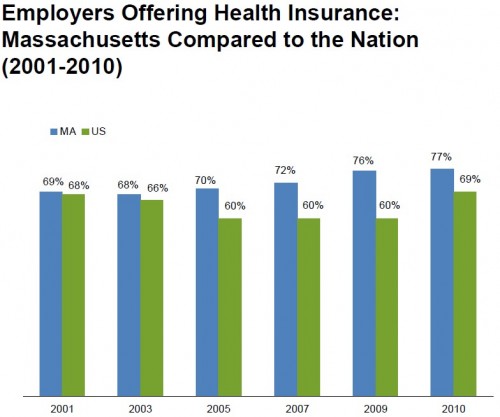 Health reform in Massachusetts was fully implemented by the end of 2007. From several years prior to that date to several years after, the Massachusetts offer rate went up. This does not prove that the increase was due to health reform. It demonstrates that health reform is not associated with a drop in employer offers. Meanwhile, the national offer rate went down, stayed steady (from 2005-2009) and then did something truly bizarre in 2010. About that huge national jump between 2009 and 2010, the report says,

Because of the poor economic climate in 2010, it is unlikely that many firms began offering coverage this year. A possible explanation is that non-offering firms were more likely to fail during the past year, with the attrition of non-offering firms leading to a higher offer rate among surviving firms.

I’ll go on record as stating that I’m not sure I buy this explanation. However, the national data don’t come from the same source as the Massachusetts data, so that they are potentially suspect doesn’t itself cast any doubt on the Massachusetts figures.

Here’s the point I keep making about the steady/increasing Massachusetts offer rate: though there is good reason to think individuals in different states may have different attitudes about and degree of interest in enrolling in employer-offered coverage, is there a good reason to think that employers in other states are fundamentally different from those in Massachusetts? Are employers in Massachusetts less interested in the bottom line? Are they less interested in returning profits to their owners? I have not seen a good argument that they are. Thus, holding all else constant, I don’t expect huge reductions in offer rates nationally. Gradual reductions over time, sure, but huge ones, no.

Because I will, no doubt, be accused of cherry picking one chart from the whole report, let me assure you that I looked through all the charts in the Massachusetts report pertaining to employer offers (as well as other sections). None of the employer offer charts challenge the basic story about Massachusetts that I provide above. One can certainly say other things related to other types of statistics in the report (on take up and premiums, say), but those are not the focus of this post.

Also, of note, but unrelated to the forgoing discussion: