The longest ever study of consumer-directed health plans, ctd.

Paul Fronstin and Christopher Roebuck (PDF) have a follow-up to their consumer-directed health plan (CDHP) paper with Martín Sepúlveda, about which I wrote last month. I read that prior work as simultaneously encouraging for CDHPs (suggesting lower outpatient visits and prescription drug use without long-term reduction in preventative screening) and discouraging (no change in hospitalization and down-stream increases in ED use). But what about cost? That’s what the new study is about.

The new work uses the same data, so let’s review from my prior post.

[It] spanned four years, 2007-2010. [It] also exploits the natural experiment of one, large, midwestern manufacturer that fully replaced its PPO with a CDHP + HSA option (consumer directed health plan + health savings account). Except for voluntary switches to plans outside the employer (e.g., spousal coverage or by leaving the employer altogether), this eliminates selection bias among plan enrollees. If an employee wanted coverage from this employer, she had to switch to the CDHP.

Still, this is not a randomized trial. The authors selected a matched comparison group from another, similar employer and obtained a very close match on age and other demographics, comborbidities, and prior use of health care services. There were 10,509 subjects in each of the CDHP and comparison groups. 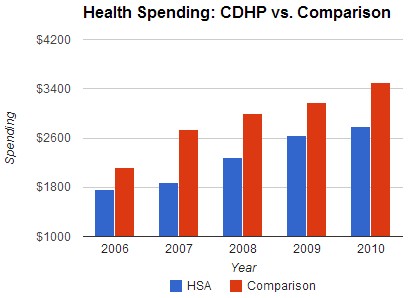 It’s pretty clear that from the baseline year (2006) to 2007, spending for the CDHP (or HSA, as the legend says) group grew much less than for the comparison group. In fact, the difference-in-difference estimate is that the CDHP group’s spending growth was 25% below that of the comparison group’s. However, after the first year, the growth difference moderates. With a model that controls for demographics, geographic region, and health status, the investigators found that, relative to 2006 levels, CDHP growth is only 8%, 4%, and 6% below that of the comparison group’s in 2008, 2009, and 2010, respectively.

Why such a big change from year one to the following years? The authors suggest this is due to experience over time with the new CDHP plan.

Health insurance coverage is complex for non-health maintenance organization (non-HMO) plans because their premiums do not account for nearly all of the spending by plan participants, as they do in HMOs. In plans with choices of providers, health insurance coverage is laden with multiple cost-sharing mechanisms within the same plan; differential cost for high-performance vs. standard networks of providers; in-network vs. out-of-network cost sharing; reference pricing (fixed payments for services with beneficiaries paying the difference for any higher charges); and tiered pharmacy payments where the placement of a medication in a tier is associated with a different beneficiary cost. The addition of a large deductible and an account with employer-provided funds to this mix certainly increases the cognitive demands for new users of account-based, high-deductible health plans. However, it is reasonable to expect that behaviors will change as users become more familiar with how to use the plan for meeting health-care-services needs over time.

I have another potential explanation: Perhaps in year 1, CDHP enrollees tried relatively harder to forgo care, saving their money under the deductible for only things that seemed urgent. However, what they may have done is actually put off care they needed and in subsequent years there was a relief of this self-imposed, pent-up demand.

In any case, no matter the explanation, this study suggests that CDHPs offer savings. But, long-term, those savings are relatively modest. They’re no where near enough to fully offset the exorbitant amount spent on health care in the U.S., relative to other, wealthy countries. That is, CDHPs may be part of a solution, but they are not by themselves a full solution.

The paper is ungated and there’s more in it than I’ve written about above.