There’s been a lot of talk recently about health savings accounts and high deductible health plans. In the debates, they are often touted as an answer for controlling health care spending. After all, if it’s your money in your account, you’re less likely to spend it. A recent study*, though, once again explains why this isn’t always a good thing:

Objective: To evaluate whether families with chronic conditions in HDHPs have higher rates of delayed or forgone care due to cost, compared with those in traditional health insurance plans.

Participants: We selected families with children that had at least one member with a chronic condition. Families had employer-sponsored insurance in a Massachusetts health plan and >12 months of enrollment in an HDHP or a traditional plan.

The concern, one I’ve expressed on the blog a number of times, is that people aren’t very good at discriminating between necessary and unnecessary care. This is fine if you’re healthy, when pretty much all care is unnecessary. If you’re sick, though, then across the board care cuts can be bad.

This study looked at families with members who had chronic conditions, to see if they had delays or foregone care more often in an HDHP than if they had traditional insurance. The HDHPs had annual family deductibles between $1,000 and $6,000. In most of the plans, office visits did not eat into the deductible and were only subject to a $20 co-payment. Prescription drugs also had co-payments. Health savings accounts were coupled with the HDHPs most of the time, but not often funded by employers. Preventive services were always covered with no deductible and no co-pay.

The traditional plans, on the other hand, had no deductible. They had co-pays for office visits and drugs, but these were usually less than in the HDHP. Similarly, preventive services were fully covered.

The big difference, of course, is that those in the HDHP are spending their own money almost from first dollar. So they’re less likely to do so. Here is what they wanted to know:

Here’s what they found: 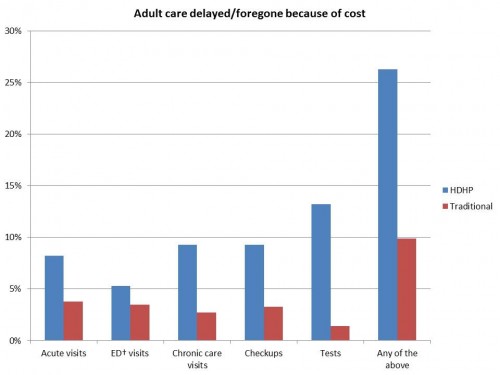 More than a quarter of adults had delayed or went without care because of cost. Adults were specifically more likely to delay or forego acute care visits, chronic care visits, checkups, and tests.

This study was new, though, in that it also looked at the effect of HDHP on children: 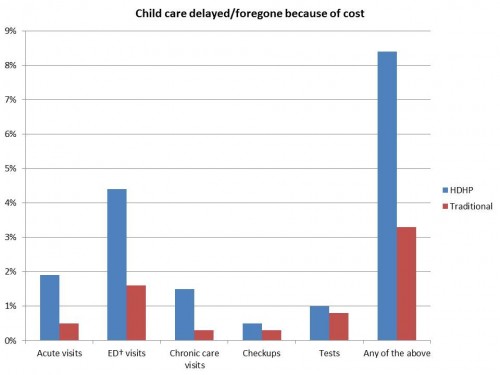 Children, like adults, were more likely to go without care, or have their care delayed, if they were in a HDHP. But in kids, the biggest difference was in the emergency department. Even when adjusting for other confounding factors, the chance of foregoing or delaying care for cost was significantly higher in HDHPs. It was also significantly higher if you were poorer.

Families with HDHPs forego or delay care because of cost, more so if they are below 400% of the poverty line. That can be a terrible thing.  Granted, the study can’t tell if the care avoided was necessary or unnecessary. But when you look at families with members who have chronic conditions, the chance of care being necessary goes up. This has implications for the future. HDHPs will be part of the exchanges if the ACA doesn’t go away. We will need to continue to watch how patients under these types of plans fare.

*My usual disclaimer: One of the authors is a close, personal friend of mine. I maintain this doesn’t lessen the quality of her work.