The downside of ACOs

The time has come to dig a bit deeper into the current vision for the future of health care in America: accountable care organizations (ACOs). ACOs represent a new model (or a new-ish version of familiar ideas) of health provider organization and payment and are the current best hope for controlling health care costs, at least for public programs. Plans for Medicare and Medicaid ACO pilot projects are included in the new health reform law. If successful, they may be implemented widely. Someday we may all receive care from ACOs.

In brief, an ACO is a group of health care providers and institutions that are collectively responsible for (and held accountable to measures of) the health of a population. An ACO has an organizational structure that permits the encouragement of improvements in quality and lower costs through payment incentives. If that was a bunch of mumbo-jumbo to you, then read my earlier post on ACOs or Michelle Andrews’ NY Times’ Prescriptions post on the topic.

There are two key elements to an ACO, one pertains to its structure the other to how it is paid. Since an ACO is responsible for the health of a population it must include a set of health care providers such that individuals seeing those providers (mostly) don’t receive care outside the ACO. This is most easily understood by counter-example. If you see three providers–X, Y, and Z–but only providers X and Y are in the ACO then that ACO isn’t accountable for all the care you receive. Some of your care, that given by provider Z, is outside the ACO. That violates the ACO concept. You can imagine that ACOs must therefore be quite large.

The reason ACOs need to include all providers caring for a population relates to the second element of an ACO, how it is paid. In contrast to the fee for service model of payment, which encourages provision of care independent of its need or quality, ACOs would receive a bundled payment based only partially on services provided. Some portion of the payment would be based on the achievement of quality and cost performance goals. The incentives of the payment system would be designed to lower costs and improve quality.

The bundled incentive payments received by an ACO would be distributed to particular providers within that ACO according to its internal governance. Given this, you can imagine that whatever entity manages the ACO would wield considerable power. Currently hospitals are the most powerful of provider entities so one might expect they would be the source of ACO management. As I’ll argue below, that’s probably a bad idea.

Abstracting from the details, ACOs include two important economic concepts: (1) provider organization and (2) incentive payments. While the first is necessary for the second it also raises the possibility of increased market power on the part of providers. If providers consolidate as they organize into ACOs–and some are already doing just that–they may gain increased market power that could be used to negotiate higher prices from insurers, seek additional rents from legislators, and game the payment system.

In this sense, the organization necessary for payment reform may offset its intended effects. This brings us back to my favorite graph that relates health care premiums (a stand in for costs in general) to concentration in the health insurance market. (Other posts that use this graph are found under the “health care market theory” tag.) 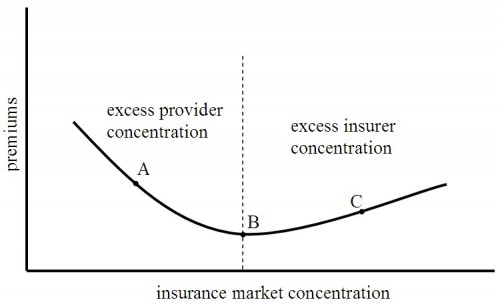 Recall that this graph is drawn for a fixed level of provider market concentration. While provider payment reform (via ACOs) may lower public costs, additional provider market power will push the system further toward the left along this curve (toward the point “A”). Private costs and premiums could rise. (Note, this is not the standard cost shifting argument. Private costs don’t rise because public payments fall. They rise due to changes in the balance of market power between providers and insurers.)

That’s no good. But there is a way around this problem. The key is to recognize that a great deal of cost in the health care system is for hospital based services while relatively little is for primary care services. Suppose primary care doctors, not hospitals, are permitted to manage ACO-like entities. That is primary care doctors could be made to be the gateway to non-emergent specialty and hospital care (sounds familiar).

The advantage of such an arrangement is that additional market power of primary care doctors would not itself drive costs up much since the services they directly provide don’t cost very much. Yet if the primary care doctor organizations were held accountable for the care their patients receive they would be responsive to the incentives of the payment system. They would refer their patients to higher quality, lower cost specialists and hospitals. One could expect costs to come down under payment reform without substantial upward pressure due to increased primary care physician market power.

The key to all of this is wrestling control out of the hands of hospitals. I can think of a few political problems with this idea.