The deadweight loss of taxation to fund social services

Discuss the cost of social services long enough and someone’s bound to remind you that the taxes that fund them impose a “deadweight loss.”

A “deadweight huh wut?” you might think. As Uwe Reinhardt explains in a must-read post, the deadweight loss of taxation is a type of cost on society that arises from one fact and one assumption. Fact: money collected through taxes can’t be used freely for other purposes by the individuals from whom it was collected. Assumption: money spent freely by individuals in markets is more efficiently* deployed than that spent by government. (I’m not contesting that assumption here, but it is an assumption.)

The concept of deadweight loss is often explained to students of microeconomics in a diagram, such as the one in my book Microeconomics Made Simple, and reproduced below with minor modification: 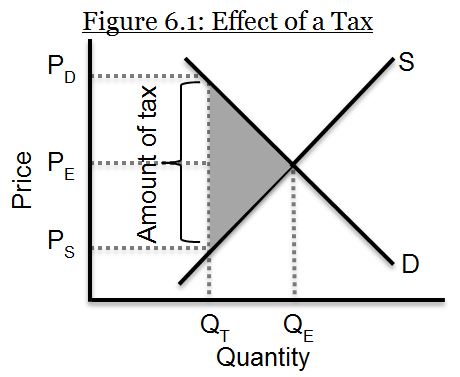 For simplicity, the figure considers a market with one good, sold at the market price PE before imposition of a tax. At that price, consumers would buy quantity QE. This is where aggregate supply (S) and demand (D) curves meet. When a tax is imposed (e.g., a sales tax on this good), people pay more, PD, and suppliers receive less, PS. The difference goes to the government to fund social services and other things like waste, fraud, and abuse (#humor). It’s fairly intuitive that people will buy less of something that costs more and suppliers will produce less when they’re paid less for each unit sold. Under the tax just QT of the good is bought/sold, as shown.

That’s all pretty obvious without a chart. What’s harder to quantify from this intuition is the deadweight loss, or how much society loses from the imposition of a tax. How do we quantify the value of the lost economic activity? It’s the area of the shaded triangle in the chart. If you recall that the area of a triangle is half its base times height, you can compute the deadweight loss for this chart as

That’s fine, as far as it goes, but is this a cost we should attribute to the in-kind provision of social services funded by taxation? How would you respond to a claim that it is? Save yourself the trouble and read Uwe’s excellent post. You’re sure to learn something.

* This is itself a bit of jargon. Economic efficiency is not a simple concept. As a rough approximation, consider “more efficient” to mean “makes people happier and better off,” in some sense.