Where’s my flying car and jetpack?

Back in the 20th Century, I gave a talk on how electronic health records were so far behind what we’d been promised. I made a joke that the local pizza place seemed to have every order I’d ever made at their fingertips, but my hospital couldn’t seem to remember the simplest facts about my medical history. A more senior physician in the audience scolded me, saying that any day now, we’d all have comprehensive electronic health records.

I guess we’ve all got those EHRs now, right? Check out this from a new RWJF report: 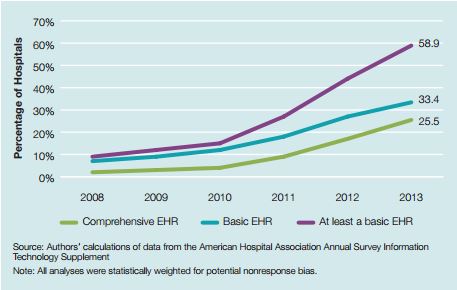 This is the percentage of hospitals which have EHRs. By last year, about one third of hospitals had a “Basic EHR”. One third. Basic EHR. You know what you need for a “Comprehensive EHR”? Whiz bang technology like physician notes. And Radiologic images. And the ability to order anything but medicine. And decision support.

The report cited fifteen different function of meaningful use. Know how many hospitals had all 15 functions? Less than 6%. 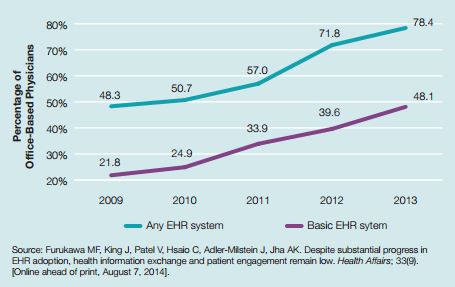 Less than half had a Basic EHR. But even those are somewhat non-functional. Only 39% of docs report their EHR having any kind of electronic exchange with other providers. Only 14% exchange electronic information at all outside their organization. Less than 5% can exchange information electronically with unaffiliated hospitals.

Yeah, any day now EHRs are going to improve quality, increase efficiency, and reduce spending. Any day now. AND I LOVE HEALTH INFORMATION TECHNOLOGY. But as I said at The Upshot:

[EHRs are] expensive. They can be difficult to use and maintain. They can interfere with clinical practice. They can increase inefficiency. They can even get in the way of a good doctor-patient relationship.

Docs don’t have them. When they do, they often don’t do what they need them to do. I’m tired of being told the golden age of health IT is upon us. Where’s my flying car?