Sometimes it’s better to say nothing at all

The CDC has a report out, entitled, “Consumption of Sugar Drinks in the United States, 2005–2008“. Why is this important? Well, the amount of sugar drinks that people have been drinking has been going up for decades. Their consumption is linked to weight gain and poor nutrition. The American Heart Association has recommended that people drink no more than 450 calories of sugar sweetened drinks per week. So how are we doing? 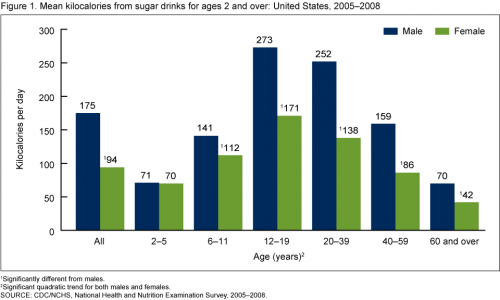 The worst offenders, teenage boys, are drinking almost 275 calories of sugar drinks per day. Almost no groups, on average, are meeting the American Heart Association recommendation. But even this doesn’t tell us the whole picture. People aren’t consuming these beverages equally: 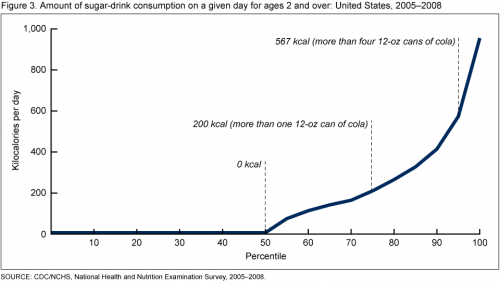 On a personal note, giving up Coke about 10 years ago was one of the hardest things I’ve had to do. I love Coke. When I was a resident I tried to organize a protest because the hospital cafeteria only carried Pepsi products. But I recognized that the empty calories that I was adding to my diet each day were making it nearly impossible to maintain a healthy weight. I hate Diet Coke. Hate it. But, on the rare occasions I drink soda, that’s what I choose. It’s made a difference. Heck, recent research has shown that if we could each consume 20 (yes, twenty) fewer calories per day for three years, every American could lose an average of 2 pounds.

So I have no idea what the American Beverage Association was thinking when they said this:

According to an analysis of federal government data presented to the 2010 Dietary Guidelines Committee, all sugar-sweetened beverages (soft drinks, juice drinks, sports drinks, flavored waters, etc.) account for only 7 percent of the calories in the average American’s diet. That means Americans get 93 percent of their calories from other foods and beverages.

Really, ABA? That’s what you thought would be good to say?

The average American’s diet is over 2000 calories. So, even if they are only consuming 7% of their calories from sugar drinks, they’re drinking more than twice the American Heart Association’s recommended amounts. That’s nothing to be proud of. Moreover, the calories from sugar drinks are utterly empty. They’re just sugar. There’s no more nutritional value from a soft drink than a pixy stix. Except, of course, for the fact that a pixy stix has less calories than a can of soda. And no sodium.

Obesity is complicated, and I’m not saying that sugar beverages are the only, or even the major cause. But they’re certainly part of it. And if we need to find something to cut out of our diets, there are few options with less redeeming value then sugar drinks. If I were the American Beverage Association, I’d consider forgoing the press release next time.