Some thoughts on health savings accounts and high deductible plans

Given the recent attacks by many Republicans on “high deductibles”, I thought that they might have abandoned their apparent love of consumer-directed health care. Perhaps not. Bret Stephens had a column in this weekend’s NYT discussing Health Savings Accounts as a panacea for the high cost of care in the US:

The only genuinely promising reform in the Republican health bills are proposals to nearly double contribution limits for heath savings accounts and allow them to be used to pay for premiums. Enrollment in tax-deductible, investable H.S.A.s has roughly doubled since Obamacare took effect, to about 20 million, because they help cover out-of-pocket costs for low-premium, high-deductible plans.

I have no problem with HSAs in theory. Truth be told, my family has an HSA plan from my employer. The difference is, my employer contributes the deductible to the HSA each year, so we’re only responsible for paying above that deductible to the maximum out-of-pocket payment.

Let’s also be clear: We can afford it. Our deductible is only $2500 for the family, the out of pocket max is only another $2500 above that, and my employer also generously contributes towards the premium cost. Oh, and I get a tax break on the remaining cost of the premiums, because employer-sponsored health insurance premiums are tax-deductible. If, by chance (and it rarely occurs cause I’m an expensive health cost guy), we manage to save money in the HSA from year to year, I get another tax break on the money made in the account.

So HSAs are great, for me, a reasonably wealthy guy who has generous employer-sponsored health insurance and a need for federal tax deductions. For most of the country – especially for the huge percentage who don’t pay federal income taxes and can’t use the deduction? Not so much.

HSAs don’t make sense for a huge part of the country, in fact. They only work if there’s money in the HSA. Where are poor people supposed to get the money to put in there? Even if you make the premiums for bronze plans free in BRCA, those plans come with $6000 deductibles. Unless the Republican bills change to fund the HSAs (which they show no intention of doing), no one just above the poverty line would be able to make use of the plans.

Of course, back when HSAs were first pushed, high deductibles meant something like $1000, not the massive ones we see today.

I understand the theory. A number of people believe (correctly) that people are less likely to spend their own money out of HSA accounts than other people’s money through first dollar insurance coverage. I also get that putting more decisions in consumers’ hands might lead to more parsimonious spending decisions. But HSAs today don’t accomplish that. They are of no use to the vast majority of people on the exchanges without significant cost-sharing reductions.

When people talk about HSAs today, especially in conjunction with the exchanges, they’re telling poorer people to put money they don’t have into accounts that don’t benefit them from a tax perspective, to pay for deductibles they can’t hope to afford.

Any serious talk of consumer-directed health care for the poorer half of America has to revolve around massively funding the HSAs, at least to the point of covering deductibles . It has to incentivize users with carrots that actually mean something to them. It also has to grapple with the fact that as long as there’s a huge gap between what they have in the HSA and what they might have to spend out-of pocket, it doesn’t matter how low you make the premium. People won’t buy plans. Don’t take my word for it. The CBO said the same.

One more thing. If you truly believe that HSAs and consumer-directed health care will slow health care spending in America, you have to grapple with this: 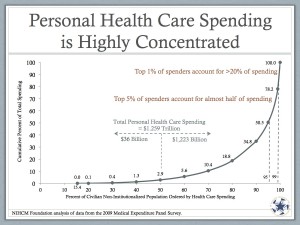 These slides are a couple of years old, so jack up the numbers in your head. In 2009, the top 10% of health care spenders in the US accounted for about 65% of all health care spending. They spent, on average, more than $26,000 each year on health care. I’m sure it’s way higher how. The point is this – health care spending in the US is concentrated among a smaller number of very expensive people. They will ALL, and I mean ALL, blow past the out-of-pocket maximum in the beginning of each year. HSAs are useless for them. Many of them are on Medicare, so the whole HSA craze doesn’t apply anyway.

HSAs and consumer-directed healthcare may help to reduce individual spending at the margins if we actually made them attractive to the poor. Even then, though, it’s hard to see how them nudge overall health care spending since the bulk of people who cost us the most won’t find any use for them at all.