I asked my Youth Guidance colleagues Tony DiVittorio and Marshaun Bacon what it was like to host President Obama at the Becoming a Man (BAM) program at Hyde Park Academy yesterday. I’ve written about that program here before. It’s getting a lot of press these days. 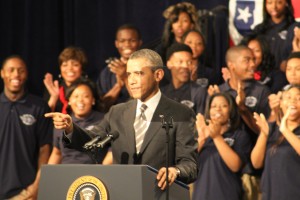 Tony didn’t hesitate: “The President would be a great BAM counselor. I’m going to offer him a job when he’s done with this one.” It’s good to know that Obama will have some options here..

President Obama spent a few hours at the school. It’s a short walk from my office, though it is a world away from the University of Chicago in terms of the opportunities and life realities facing its students.

Much of the President’s time was spent pressing-the-flesh with the griteratti of Chicago’s political class. Everyone seemed to be there: Aldermen and alderwomen, local foundation heads, university dignitaries, Senator Durbin, Governor Quinn, Mayor Emanuel, and Cook County Board President Preckwinckle were there. 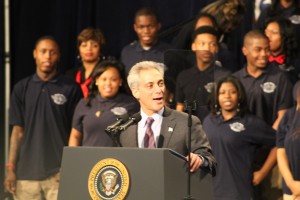 Sprinkled through the crowd, one could also spot other notable, if less-famous people: Hadiya Pendleton’s parents and others who lost loved-ones to gun violence, the south side’s 93-year-old civil rights hero, Timuel Black, and many others.

I was not one of the honored griteratti.I didn’t get to meet the President as some of my colleagues did. From the nosebleed seats at the back of a large gymnasium, I was happy I had brought my snazzy camera and 300mm lens to capture the action from a few hundred feet away. 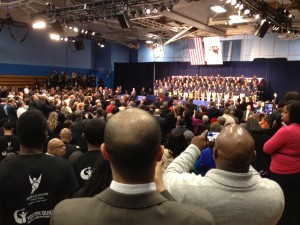 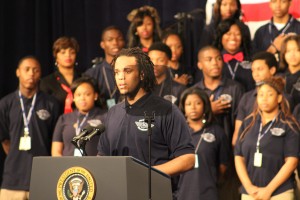 The speech was scheduled to start at 2:40. It started fifty minutes late, with a fantastic, definitely-not-lip-sync-ed rendition of the national anthem by the a Hyde Park Academy student, whose performance blew Beyonce’s away.

The delay was okay because President Obama spent about an hour speaking with a BAM group of high school students.

The man who wrote Dreams of my Father shares a few biographical threads with these young men: “I wish I had had a father who was around and involved,” the President told the BAM group. 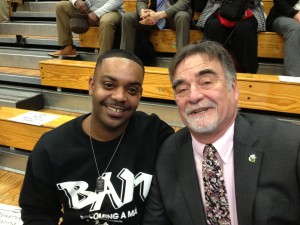 The President knows what it was like to be raised by a single mother, having barely known his father during his formative years. Many BAM kids (and mentors, too) know this subject all too well.

No less important, the President understood some of the key ways that his life was quite different from these kids’ lives, as well.

These are all some exceptional young men, and I couldn’t be prouder of them.  And the reason I’m proud of them is because a lot of them have had some issues.  That’s part of the reason why you guys are in the program.  (Laughter.) 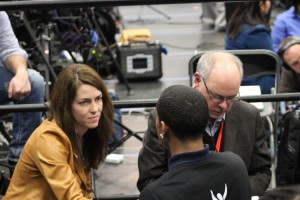 But what I explained to them was I had issues too when I was their age.  I just had an environment that was a little more forgiving.  So when I screwed up, the consequences weren’t as [dire] as when kids on the South Side screw up.  So I had more of a safety net.  But these guys are no different than me, and we had that conversation about what does it take to change….It’s not easy. 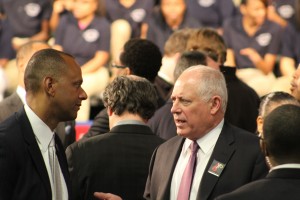 But it does require us, first of all, having a vision about where we want to be.  It requires us recognizing that it will be hard work getting there.  It requires us being able to overcome and persevere in the face of roadblocks and disappointments and failures.  It requires us reflecting internally about who we are and what we believe in, and facing up to our own fears and insecurities, and admitting when we’re wrong. 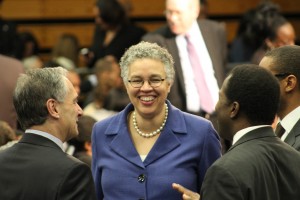 It’s not easy to be a 17-year-old kid in the unforgiving world of Chicago. It’s no easier in Cleveland, or Detroit, or Baltimore, or countless other cities in the United States whose challenges get less attention than Chicago’s right now but are in no way less severe.

I’ve been speaking with many reporters lately about Chicago homicides, Newtown, and the President’s visit here. These interviews have been useful, though many run together in my head because they hit the same familiar talking points in gun and crime policy.

The Atlantic’s Ta-Nehisi Coates and I got deeper into things in this extended dialogue. We touched on Becoming a Man and other subjects. I hope you have a look.