I was shipping press releases to journalists, when I had a sudden realization: I am the press. Hence this bit of business from the University of Chicago Crime, which I co-direct. 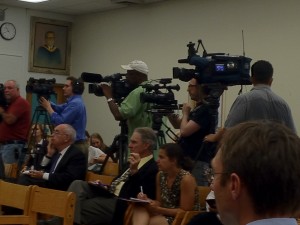 Yesterday we held a nice press conference to announce the results from one of our first major efforts—a randomized trial of the Becoming a Man, Sports Edition (BAM-SE) youth violence prevention intervention.  My two colleagues Jens Ludwig, who is the operation’s CEO, and Executive Director Roseanna Ander presided over the ceremony. An accompanying paper by doctoral student Sara Heller, me, Roseanna, and Jens will be delivered later this month with detailed results.

BAM-SE was developed and delivered by two Chicago area nonprofit organizations–Youth Guidance and World Sport Chicago. We have worked closely with these organizations for almost three years now. We all worked really hard on both the intervention and on the analysis. I’m especially proud of this work and what was accomplished.

In our study, BAM-Sports Edition was delivered in 18 CPS elementary and high schools, mainly on Chicago’s south and west sides.  2,740 male 7th-10th graders were assigned via fair lottery either to program groups offered services, or to a control group who received the standard services Chicago Public Schools (CPS) otherwise offers. More than 800 boys actually took part.

These young men were pretty typical of others at their schools. Viewed in broader context, they faced serious challenges. One-third had been arrested at some point prior to the start of the program. Their average GPA in the previous year was in the D+ range (1.73). We excluded the most chronic truants, who were unlikely to productively participate in a school-based intervention. Still, on average, study youth had missed more than six weeks of school in the year prior to the study.

The intervention was delivered to more than 800 boys during the 2009-2010 school year. Using administrative data from CPS and the Illinois State Police, we tracked students’ school engagement, school performance, and arrests over the 2009-2010 and 2010-2011 school years. Following the intent-to-treat framework, we compared outcomes among students invited to participate with their control-group counterparts. While we’ll inevitably tinker with things, the bottom-line is pretty clear.

BAM-SE also improved school performance and engagement, measured by days present in school, grade point average, and school persistence. The main benefit appeared to occur at the bottom of the grade distribution, as students interacted more productively and diligently in the classroom setting.

This intervention was no gold-plated thing. It cost about $1,100 per participant, and was thus fantastically cost-effective when one accounts for the economic benefits associated with reduced criminal offending. It was also designed and implemented by Youth Guidance and World Sport Chicago to realistically work in a challenging environment.

It’s a huge challenge, and an art to implement a randomized trial. It’s a privilege to work with such skilled and committed research colleagues as Sara Heller, Roseanna Ander, and Jens Ludwig.

It’s no less of a privilege to work with my World Sport Chicago colleagues Scott Myers and Jason Eby, and with Youth Guidance’s Tony DiVittorio, Wendy Fine, David Simpson, and Michelle Adler Morrison. The coaches, peer mentors, and leaders of these two organizations make a huge difference in the lives of thousands of young people.

Youth violence is a huge problem. Among African-Americans, Two big obstacles hinder efforts to reduce it. First, we know far less than we should know about what really works, for whom, and at what cost. Second, we fight a generalized pessimism, the fear that nothing really works beyond warehousing increasing numbers of criminal offenders. This pessimism comes in different ideological flavors. The conservative flavor is most familiar—the only way to really protect public safety is to lock the bad guys up. This pessimism comes in liberal flavors, too—we can’t expect lower crime rates until we address fundamental problems of poverty, educational failure, and inequality. There is some truth in both perspectives. Each is also harmful because they direct public attention away from the methodical process of implementing feasible and humane efforts right now to make things better.

We need the right combination of patience and urgency to do better. We must assemble a knowledge base rooted in rigorous evaluation research. We must also demonstrate that–in fact–effective prevention programs can make a difference. Programs such as BAM Sports Edition are beginning to do that.