I’m a pediatrician, so I work in a a specialty where there are more women that men. In fact, I’ve personally mentored and trained far more women in pediatrics than I have men. Because of that, I sometimes think that discrepancies in pay and such must have ended some time ago. If only there were data to confirm my suspicions.

Well, it turns out there are data, but they’re not good.

Recently, in Health Affairs, a study was published on starting salaries for residents leaving training in New York State from 1999-2008.

The authors abstracted data  from the New York State Survey of Residents Completing Training, which is run each year by the Center for Health Workforce Studies of the State University of New York at Albany. Other than one or two years when funds prevented the survey from being completed, it’s been fielded every year since 1998. The authors were most interested in residents’ starting salary, defined as the self-reported base salary plus expected incentive compensation.

First, let’s look at the unadjusted analyses. Here are starting salaries, for men and women, in selected physician specialties (I made the chart with their data): 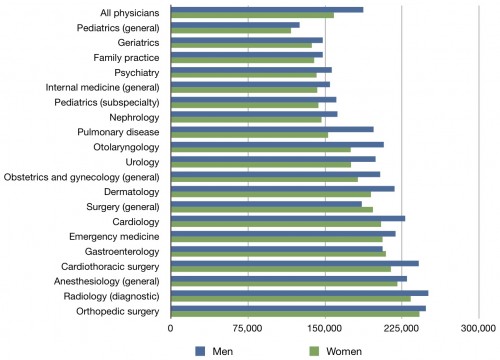 Not only do women have a lower starting salary overall, they have a lower starting salary in nearly every single specialty.  I took a look in the appendix, and if you include all forty-five specialty groups, women lose in every one but four (general surgery, critical care, gastroenterology, and “other” anesthesiology subspecialty). These four specialties account for only 2.9% of graduating female residents.

That’s sort of stunning. But, it’s possible that other factors come into play. Maybe all the women chose jobs with fewer hours, or in cheap areas. So the authors conducted analyses that looked at average mean salary while controlling for the forty-five categories of specialty training, race/ethnicity, age, citizenship, foreign medical graduate status, whether graduates had an MD or OD degree, educational debt, Health Professional Shortage Area work obligation, practice type, location type, patient care hours, and year. Did that get rid of the discrepancy?

﻿The solid lines are the unadjusted analyses. So the controlled analysis (dotted lines) about halves the discrepancy. this still means that after controlling for all those other factors, men still had a significantly higher starting salary than did women.  Not only that, but it’s getting worse. It’s risen from $3600 in 1999 to over $16,000 in 2008.

The manuscript offers a number of explanations for this; some put the fault on the system, and some try and come up with other factors that could legitimately explain the difference. I’d say that the onus is on the system, however. There’s a discrepancy, it’s getting larger, and it’s not easily explained by any of the usual excuses. It’s time for this to end.

Apologies if there’a paywall, but here’s the full study: The $16,819 Pay Gap For Newly Trained Physicians: The Unexplained Trend Of Men Earning More Than Women