Yesterday, I highlighted a Commonwealth Study comparing twelve industrialized nations to show how we’re paying more for the same drugs. Today, I want to point out some other findings related to quality. Specifically, I want to show you some data related to how well we care for chronic diseases.

One of my longstanding complaints about the US health care system is how we focus so heavily on really bad, but relatively rare things. We will do anything it seems to prevent a death from happening, but we will often ignore primary care, public health, and chronic disease ambulatory care. That’s penny-wise and pound foolish, and it bears out in comparative data.

When we don’t care properly for people with chronic diseases on an ongoing basis, they get sick. Then, they need to get admitted to the hospital. That’s expensive, and often avoidable. So a well-functioning health care system will work to prevent admissions for chronic diseases. And, in this, we fail: 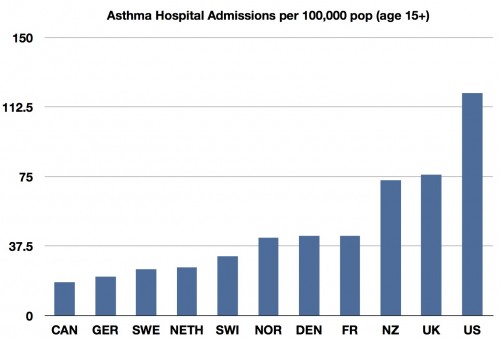 That’s the number of people over age 15 per 100,000 pop who had to be admitted to the hospital for their asthma in 2007. We’re not even close to doing well, let alone being number one. And it’s not just asthma.  Here’s hospitalizations for congestive heart failure: 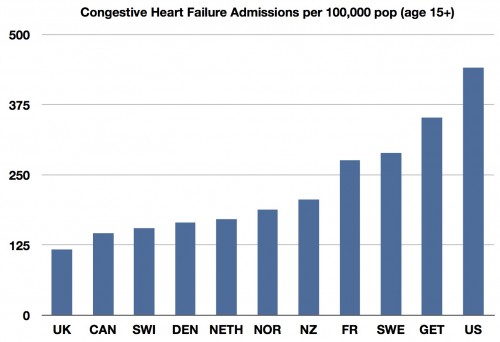 But that wasn’t even the worst thing I saw in the report. That prize goes to diabetes. You see, if you don’t take care of your diabetes properly, over time you can get really bad complications. You can have eye problems, or kidney problems, or circulation problems. Sometimes these get so bad, then lead to non-healing wounds which result in amputations. Obviously, this is a complication you don’t want. Yet, here are lower extremity amputations due to diabetes: 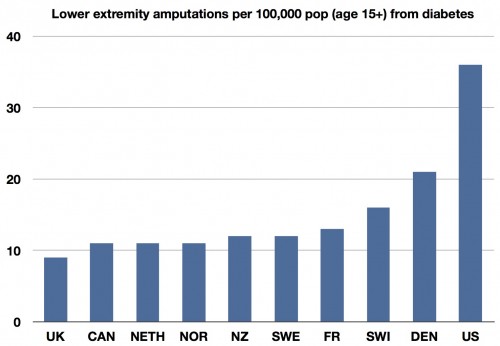 That’s so bad, I don’t even know where to start. We’re an obese country, and we have more diabetes than most other countries, but this is a preventable outcome. And we’re doing really, really badly.

When we brag, we consistently stick to the same things. Rare transplants, survival rates of cherry-picked cancers, and other aspects of the system that don’t relate to outcomes. But this is the stuff that often matters: common chronic diseases that require ongoing care and a well-functioning health care system. We don’t have that system, and it shows.