No year-end lists for me. I don’t care for them that much. But I will spend some time talking about some favorite things. I recently did an interview where I was asked for my favorite book. I hate to answer questions like that, because I have any number of books that I might consider my favorite at any one time or another. But if you asked for my favorite author, the answer is easy. It’s Robin Hobb.

That’s not just because I love her writing (I do). Sure, her character-driven fantasies are amongst my favorite, and her books do often wind up in my top 5 or 10 lists. But she’s my favorite author above all others for the following story.

On January 2, 2002, Fool’s Errand was published. It was a continuation of her very popular Farseer Trilogy, which was my favorite of her series. As you can imagine, I was incredibly excited to read it. I pre-ordered the book at the local Barnes and Noble in University Village, and looked forward to reading it.

In preparation, I was looking around on the Internet, and stumbled across the fact that if you sent Robin Hobb an email, she would send you an autographed insert for your book. How awesome! I made a note to take care of this as soon as I could. I got a bit distracted, though. On the night of January 4, my wife’s water broke; the next day, Jacob was born. 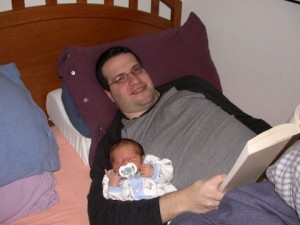 It took me a little while to get to the book. Not as long as you’d think, though. I soon found that there’s no better time to read than when a baby is sleeping next to you. So I soon got my act together and sent Ms. Hobb that email, asking her to make a bookplate out to Jacob. I explained that I was reading the book with him by my side, and that someday he might appreciate the inscription. I also send her a picture of the two of us. Jacob was 6 days old. I was a lot heavier than I am now, and I had braces (keep your comments to yourselves). 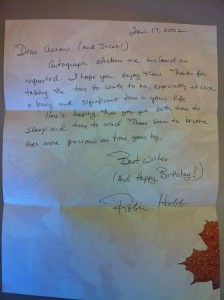 Soon after, she sent me a nice email congratulating me on Jacob’s birth. Towards the end of the month, I received the letter at right (click to enlarge). How awesome is that? My dream is that someday Jacob loves the books as I do, and I’m going to frame that letter for him. I just couldn’t believe that a bestselling author would take the time to do that for me.

Fast forward one year. On January 1, 2003, Golden Fool was published. Even better, Robin Hobb (who lives in Washington State) was going to come to the local Barnes and Noble to promote the book. I patiently waited in line with my new copy and got to talk to her for a few minutes. I told her the story of the first book, and she claimed to remember. I have no idea if she was telling the truth, but she was very gracious. Since it was Jacob’s first birthday, I had her sign the book to him again as a birthday gift.

One more year into the future. In February 2004, Fool’s Fate was published. My second son, Noah, had been born weeks before. I decided that I needed to get one more bookplate made out to both of them to complete the trilogy. There was only one problem. Her website said that she was no longer accepting requests for autographed inserts.

I was distraught. I really wanted to complete my collection. I tried desperately to find a way to contact her. I posted on message boards. I also sent an email to an old address that she had once used. I recapped the above and asked for an exception. I ended the email with:

Will you still send signed inserts?  I’d love to get one more made out to both Jacob and Noah to complete the set.  When they’re older, I hope the fact that these were the books I read at the start of their lives will have meaning for them.

I didn’t have much hope. But nine days later, I received the following from her:

I decided to answer this only by e-mail. As it happens, I gave up on the autograph inserts some time back.  The number of requests had become overwhelming, and despite my best intentions and effort, I could not keep up.  But I think your ‘collection’ merits an exception, and I’ll be happy to send you an insert.  Please email me your address, and I’ll put one in the mail.

Thanks for being such a loyal reader! 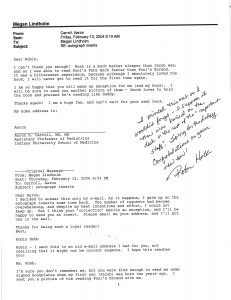 I quickly replied with thanks and sent her my address. And, not long after, I received the letter at right, along with a whole slew of autographed inserts. I still have one left.

Most of us never get to know authors personally. We only know them through their work. I know it’s presumptuous to say that I know Robin Hobb better than any of you. But I feel like I do. Anyone who would take the time to do something so meaningful for me, again and again… well, that’s someone pretty special. I am forever in her debt.

Plus, she’s a hell of a writer. You should go read her books. 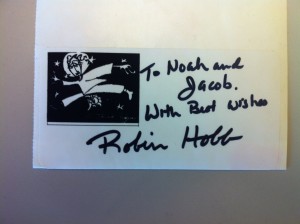