The following has been cross-posted at The New Republic’s Citizen Cohn.

The expansion of coverage expected by the Patient Protection and Affordable Care Act (PPACA) is paid for in large part by anticipated massive savings from cuts to Medicare. It’s amazing that all that fat was sitting around in the Medicare program–adjustments to hospital reimbursements, reductions in over-payments to private Medicare plans (Medicare Advantage). What a coincidence that just when we needed to fund coverage expansion, there was Medicare waiting to be milked like a prized cash cow.

Actually, it is no coincidence. Medicare has been exactly that, a cash cow, for decades. In 2002, Robert Reischauer described Medicare in precisely those terms when reflecting on his service as CBO director from 1989 to 1995.

Medicare was the cash cow! There is a very simple reason for this and that is that Congress could get credited for deficit reduction without directly imposing a sacrifice on the public. . . . And to the extent that the reduction actually led to a true reduction in Medicare services, it would be difficult to trace back to the Medicare program or to political decision-makers.

Though tinkering with Medicare payment rate trends and update factors has provided budgetary cover for other goals for decades, I don’t think Medicare beneficiaries remain as clueless as Reischauer suggested they may have been about who would be responsible for reductions in services should they occur. The PPACA is a Democratic law, even if it includes many Republican ideas. Should Medicare services erode, Republicans will waste no time reminding Medicare beneficiaries who they think they ought to blame.

Of course, it’s just that sort of political gamesmanship that has put Medicare on an unsustainable path. Aside from the 2003 Medicare Modernization Act (MMA)–which added a costly drug benefit to the program–major legislation affecting Medicare spending since 1997 has either decreased it substantially or increased it only modestly (see the Kaiser Family Foundation figure below (click to enlarge; apologies for its intense blueness). Yet despite legislation aimed to trim its cost, Medicare is not in sound fiscal shape. 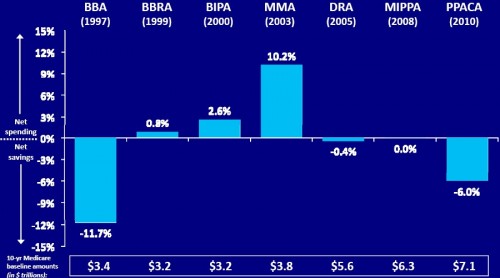 What the facts and the figure illustrate, more than anything else is a Medicare funding policy that treats the program as a piggy bank and political pigskin without actually addressing the financing problems at its core. Thus, the up-and-down funding changes to the program depicted in the figure reflect a political process incompatible with sensible long-range health policy and budget planning.

The PPACA has a fix for that problem too, in the Independent Payment Advisory Board, a panel that will recommend Medicare spending changes for Congress to consider with an up-or-down vote. It’s supposed to take the politics out of Medicare funding. If it works, Medicare will be nudged toward a more sustainable path. The Medicare cash cow will be slaughtered for good.