With respect to cancer care, it is unclear that Medicaid matters very much. Health blogger Avik Roy has written about other studies that find that Medicaid patients do no better and sometimes worse than the uninsured. Additional evidence is supplied by Scott Gottlieb . If you’re trying to get a primary care appointment, it appears your chances are better if you say you are uninsured.

I’ve pre-responded to some of this:

Health economist Austin Frakt takes issue with these studies, claiming that Medicaid and non-Medicaid populations are fundamentally different, even after adjustment for race, income and other socio-economic factors. That claim seems improbable, however, in light of the heavy ping-pong migration of people in and out of Medicaid eligibility.

No doubt there are people at the margins who do migrate in and out of Medicaid. However, that does not imply that the populations on Medicaid are equivalent to those not on Medicaid, even controlling for observable factors. We should think more deeply about why people who are otherwise nearly identical by all observable factors are either on or off Medicaid. Why, for example, would someone not be on Medicaid one month and then enroll the following even if they were eligible both months? Or, if it is a small change in income that confers eligibility, why did that income decline or rise? Do the observable factors explain everything? Many studies, which I’ve cited (see also the links above), show us they do not.

Frakt points to some studies finding that Medicaid makes a positive difference over being uninsured. But the results would probably have been just as good or better if we spent the money giving free care to vulnerable populations. […]

Bottom line: after we get through 10 years of spending our $1 trillion under ObamaCare, there is no convincing reason to believe that the bottom half of the income distribution will have more care, better care, or better access to care than they have today.

Medicaid does facilitate care to some very vulnerable populations. Remember The Medicaid population in one chart? Here it is: 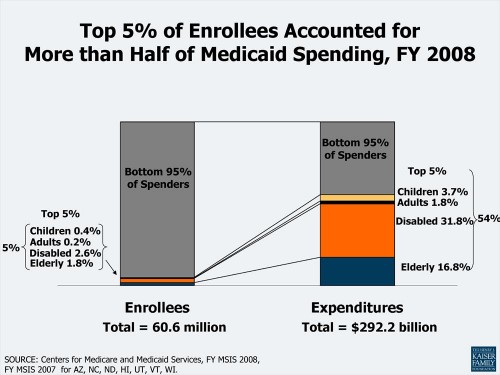 Will those who become insured by virtue of health reform have better health outcomes than they would otherwise? Many studies suggest they will. Colleagues and I wrote last year,

Viewed as a whole, the body of evidence shows that this relationship is well established. Last year, comprehensive literature reviews conducted by the Institute of Medicine and published in the Milbank Quarterly concluded that the overwhelming majority of well-conducted studies have found important health benefits of insurance, including lower risk of mortality. In addition to quasi-experimental research, several observational studies by leading researchers that controlled for a robust set of characteristics have demonstrated a 35-43% greater risk of death within 8-10 years for adults who were uninsured at baseline and even higher relative risks for older uninsured adults with treatable chronic conditions, such as diabetes and hypertension. These and other relevant studies are described in three online summaries […] by Stan Dorn on Ezra Klein’s blog at the Washington Post (tinyurl.com/StanDorn), Harold Pollack on The New Republic’s The Treatment blog (tinyurl.com/HPollack), and by J. Michael McWilliams on Austin Frakt’s blog The Incidental Economist (tinyurl.com/JMMcWill).

I confess that I like to follow the evidence. I also confess that the ACA will not solve all of the problems of our health care system and may exacerbate some. My preferred solution is to work to continue to pass and implement additional reforms, not to attack the one we have. If there were a better alternative on the table, one that made greater improvements with fewer adverse side-effects, and, crucially, that could pass Congress, I would support it. Where is that alternative?