How market concentration can be good

Take the health insurance market,* for example. It’s famously concentrated. The way the story is typically told is that a few big insurers with massive market clout are demanding excessive premium increases. Wouldn’t we all be better off if the insurance market were less concentrated? Wouldn’t greater competition lead to lower prices?

Not necessarily. One reason it would not is offered by the work of Glenn Melnick, Yu-Chu Shen, and Vivian Wu in their recent Health Affairs paper “The Increased Concentration Of Health Plan Markets Can Benefit Consumers Through Lower Hospital Prices.” Here’s what the authors found:

Consistent with a large body of prior work, some of which they cite (see also this (pdf) and a related FAQ entry), their results

That last bit–“as long as health plan markets remain competitive”–needs some explanation. A question not addressed in the paper is whether insurers that are able to negotiate lower prices due to their relatively higher market concentration pass any of the savings along to consumers in the form of lower premiums. That is, do consumers really benefit if insurers get good prices? Or do insurers just turn around and stick it to the consumer anyway, raking in higher profit? A monopoly insurer would. Insurers in a relatively competitive market would not, or not as much.

This all implies there is a sweet spot, a degree of market concentration of insurers relative to hospitals that leads to the lowest premiums. That’s what my figure illustrates: 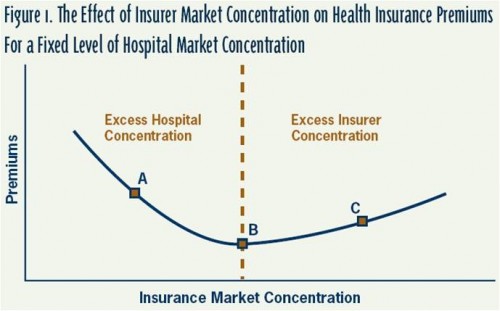 However, health economists do not know where that sweet spot is. Sarah Kliff also raised this point–that it is not clear from the paper by Melnick and colleagues precisely how much hospital and insurer market concentration affect premiums. A reason neither this, nor any other study I’m aware of, simultaneously relates insurers’ and hospitals’ market power to premiums is that there are some very challenging econometric issues in doing so and because comprehensive, historical data on commercial market health insurance premiums (as well as benefits needed to standardize them) are not readily available to researchers at relatively low prices. In fact, even the theory has not been fully worked out beyond its qualitative contours.

One final point about lowering private prices to hospitals: it’s not only potentially good for consumers, it’s good for taxpayers. One of the constraints on Medicare’s ability to lower prices it pays to providers is the price level of the private market. Medicare can only push its payments so far below private payers before providers threaten to see fewer Medicare patients, creating a political problem for policymakers.

(A key caveat to the paper by Melnick and colleagues is that their findings are descriptive and associative. This is acknowledged by the authors and is due to the methods employed. Having said that, the direction of causality between market power and price is accepted by economists based on theory and other empirical work.)

* There is not one health insurance market, but many. For simplicity, unless stated otherwise, I will write as if there were just one.