In the third chapter of its 2011 Report to Congress (pdf) MedPAC reports that “profit margins on Medicare patients remain negative for 64 percent of hospitals.” That sounds dire, and maybe it is. However, it does not itself mean that Medicare payments are too low.

To say that Medicare payments are “too low” begs the question, relative to what? Typically what one means by this is that Medicare pays hospitals at rates lower than private insurers. That’s true, in general. But who is to say that private insurance rates are not too high? MedPAC, I, and others have argued that they, in fact, are, in many cases.

Often we presume that market-based prices are “correct” or closer to correct than government set ones. In markets that are sufficiently competitive prices are “correct” in the sense that they lead to an economically efficient allocation of scarce resources. Without unpacking what the means precisely, suffice it to say that an economist can claim a degree of “correctness” to prices in a competitive market.

Even if you buy the economist’s logic however (and maybe you don’t), notice the assumption required: competitive markets. Are hospital markets competitive? Some are. Many are not. Lots of evidence to support that statement has been posted on this blog.

An unconcentrated health plan market is one in which hospitals have greater ability to raise the prices health plans pay. The more health plans, the better hospitals can play one off another. Hospitals are not reliant on a dominant plan for a flow of patients. They can afford to be excluded from some plans’ networks. Thus, prices can be profitably increased. All other things being equal, a market with low health plan concentration is one in which hospitals have relatively greater market power, the ability to negotiate higher prices and earn higher profit.

This makes sense when you think about costs. How would you expect costs to vary by market power? Well, hospitals able to charge higher prices (those with high market power or under low financial pressure) have considerable head room to incur higher costs. They certainly have relatively lower incentives to keep costs down. Not so hospitals with low market power (under high financial pressure). Their costs ought to be lower because they can’t afford to be otherwise. That’s what MedPAC found. 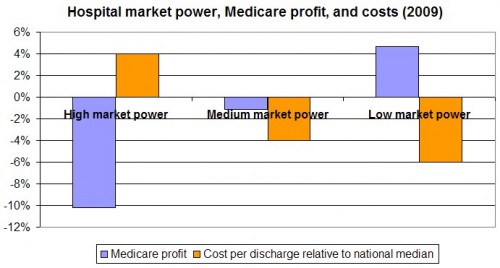 And, we really can say those private prices are too high in a precise sense. Market power is due to lack of competition, which is one form of market failure. In the presence of such failures, the prices charged are not economically efficient. Not only do they lead to higher private premiums, they put pressure on Medicare to keep its prices higher than they would otherwise be. Market power has spillover effects, leading not just to higher prices in the hospital market, but higher taxes (or debt) to pay Medicare’s bills.