This post is part of a series in which I’m dedicating two months to learning six new skills this year. The full schedule can be found here. This is month five/six. (tl;dr at the bottom of this post)

Let’s start with the good news: You can absolutely learn to draw. The bad news is that I’m not sure I enjoy it enough to make it a regular part of my life. That’s not to say that I didn’t find the last two months to be rewarding; I certainly did. I think that drawing, and drawing well, just take too much time and undivided attention. It will be hard to keep it up.

This post will be chock-full-of-pictures, because it was “drawing”. If that’s not your thing, feel free to skip to the tl;dr below.

Most of my efforts were focused on one source, because it was the overwhelming advice of nearly all of you who responded. I read Drawing on the Right Side of the Brain, by Betty Edwards. I also bought the workbook, which is really all you need. If I were to do this again, I’d just go with that.

Ms. Edwards breaks down drawing into five sections. These include:

There’s genius there. The first section starts by making you commit to some drawings, so that you can see how much you’ve improved later. I’m embarassed by mine, but I’ll post them nonetheless. Then, she gets into edges. A lot of the exercises are meant to train your brain to stop worrying about what you’re drawing and just focus on what shapes you see. One of her tricks is to get you to draw things upside down. For instance, I couldn’t draw a horse to save my life, but when I copied this Schiele drawing upside-down, I had much less trouble: 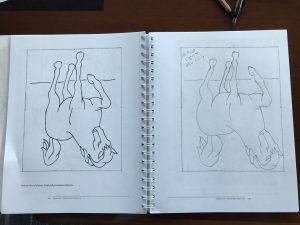 When you’re just drawing the edges without thinking about what you’re drawing, you do much better. One of the very early exercises (May 5th) was drawing a hand. I drew another on May 17th, holding a small plastic fork. In the second, I focused on small spaces, the edges between things, and not the hand. You also learn to look at things with one eye closed, to see them two dimensionally. The difference is stunning: 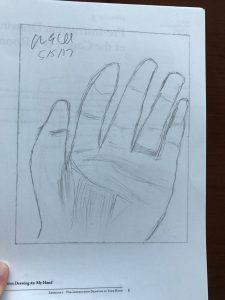 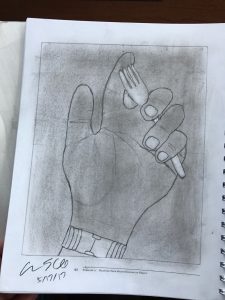 The second section gets into negative spaces. This is where you focus on the stuff around what you’re drawing as much as you focus on the subject itself. I can’t stress enough how important this is. For instance, here’s a picture of a kitchen tool I drew pretty much entirely by shading in the area that wasn’t the tool: 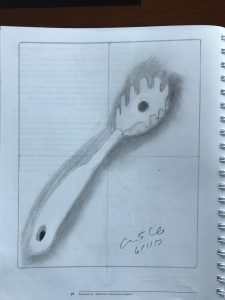 In another exercise, I copied Vincent Van Gogh’s Man, Sitting, Reading a Book with special emphasis on the negative spaces within and without the figure. This was on June 7th. I was starting to get proud of myself: 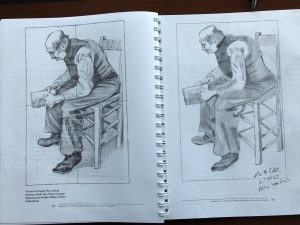 Learning about relationships meant developing skills to sight angles and proportions. You know when you see an artist hold up their pencil or brush at arms length and close an eye? That’s sighting. It makes a difference. On May 5th, I drew the corner of a hotel room. On June 7th, with what I’d learned, I drew our dining room through our kitchen. Again – progress. 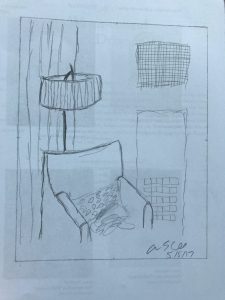 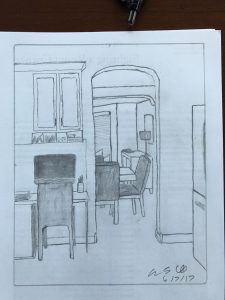 It also means learning to sight in figure drawing. Here’s a drawing I did copying Sargent’s Standing Male Nude Seen from Behind: 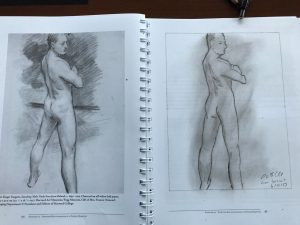 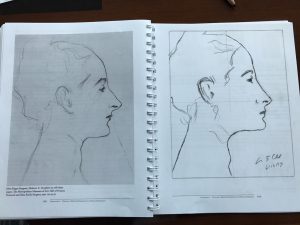 This section ended with a side portrait, which I did of myself. Aimee tells me it looks more like my brother than me, but I was pretty proud of it: 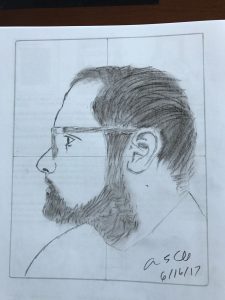 The final section was about light and shading. It ended with a full on portrait. That’s where I decided to stop, because the final section (on Gestalt) didn’t seem to add much more. The full portrait was also one of the starting exercises you did, so you could see your progress. First up is my self-portrait from May 5th, followed by my same on June 29th. 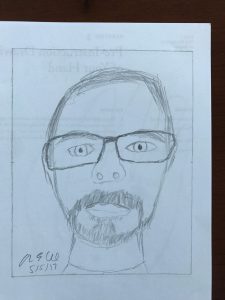 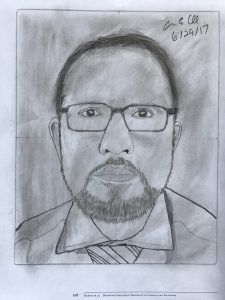 I’m not going to try and argue that now I’m super talented at drawing. I will never say again, though, that “I can’t draw”. This exercise was a complete success in that respect. I feel like I know what I’m doing, and I don’t doubt that if I continued to work at this, I’d improve. I also learned some basic tips I’ll pass on:

Unlike knitting, I found that I had to give all my attention to drawing. I can’t do it while I talk to people or watch TV. It also takes a lot of time. I’m not sure it’s something I want to keep up. Knitting, on the other hand, I have. I’m working on a pair of socks for Aimee. I’m also meditating again. I think drawing, while a useful learning experience, is something I will let go for a while.

Hebrew is next. Deep breath. I’m not a language guy.

tl;dr: You can TOTALLY learn to draw. It’s not an innate skill. The only thing you need is a drawing set and the Drawing on the Right Side of the Brain Workbook.