This post is part of a series in which I’m dedicating two months to learning six new skills this year. The full schedule can be found here. This is month three/four. (tl;dr at the bottom of this post)

There were three lessons outside the skill I learned this month. First, it appears that very few men knit in public. I learned this because many women felt compelled to tell me this, in public. Second, I am apparently very comfortable in my own skin, because when people stared at me (they did) or took pictures of me (they did), I didn’t care at all. Neither did my wife, who apparently also likes that I don’t care. Third, knitters – while underground – are very, very friendly people and must talk to you about your knitting, their knitting, and anything else to do with knitting.

I started this month, as I almost always do, with a book. I tried Knitting Without Tears by Elizabeth Zimmerman. Huge mistake. This book, while pitched as a helpful starting place, was clearly written for Jedi Masters of knitting. I couldn’t do anything with it. The few diagrams were impossible to decipher, and I didn’t even get much of the text. I know a lot of knitters swear by it, but I was lost.

This was a problem, because I now had piles of cheap yarn, knitting needles of all sizes, and other various accouterments. And no knowledge at all. It was then I turned to YouTube.

I should have started there. YouTube is where it’s at for knitting. After watching various videos, I finally stumbled upon this one, by Hobby Lobby. It was basic enough to get me started.

First, you need to cast on. This is how you put your yarn on the needle and set the groundwork for the number of stitches in each row you’ll knit. Then, you learn to knit, using the other needle. The gist is that you push your needle through the cast on circle on the left, loop the thread around your right needle tip, and then drag it back through the circle on the left. Words fail. This is why you need a video.

With this knowledge, I went to work. I made a number of swatches over the next week. Here are a few: 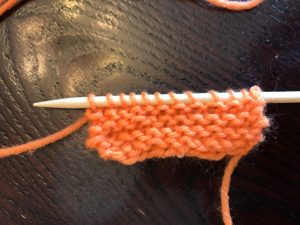 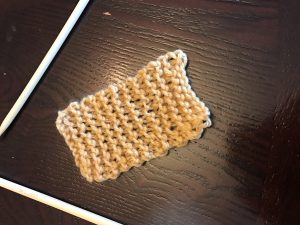 I needed to learn to purl, which it the other main stitch in knitting. Also, the cast on technique from the Hobby Lobby video wasn’t really good enough. That’s when I found Chandi, from ExpressionFiberArts. Her intro video has more than 4.5 million views. I’m on YouTube, people; those are real numbers. Her videos are top notch for knitting. Trust me, I watched a ton of them. How do you bind off? Change colors? Slip a stitch? Almost any question you might have – she or someone else has a video.

Her cast on technique was much more solid. She got me most of the way to knitting, purling, and binding off. Plus, she was a little more entertaining than most. But my purls weren’t coming out right. So I made a trip to the yarn store.

This was hard. Really hard. First, I had to overcome my natural inclinations not to talk to others. Plus, I had to go talk about knitting. I didn’t want to.

Our local yarn store was just as you’d expect. Full of older women sitting around and talking while knitting. There was a dog who clearly was afraid of all people, especially my daughter and middle son – who wanted to pet the dog. The one proprietor did not want to talk to me, and she seemed suspicious of my intentions or desire to knit. I did not feel welcome. To her credit, she did correct my purl technique. I’d been wrapping the yarn around the right needle in the wrong direction. Very helpful. She also sold me some thick soft “yarn” that my daughter picked out for a scarf.

I figured this would be a good “first” project. I went wide – at least six inches – and chose a “seed” stitch. That’s just alternating knits and purls the whole way. It’s reversible, and I thought it would look nice. Off I went. The problem was, though, that I wasn’t yet good enough to recognize which were knits and which were purls. I had to rely on counting and memory where I was. Also, I wasn’t great yet at fixing my mistakes. I had many moments of panic. I made progress: 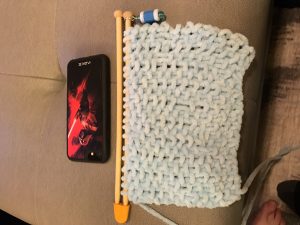 It was a lot of repetition, but it was pretty rewarding to see it grow! 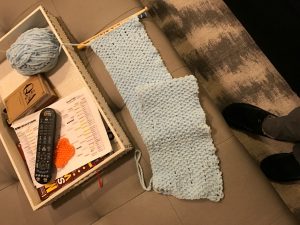 Plus, I was knitting! It’s hard to see from the pics, but this material was ridiculously light and soft. It was clearly artificial. But it’s what Sydney wanted, and I wanted her to use the scarf, so that’s what I used. When it was done, I was much, much prouder than I would have thought. On the other hand, I could see it was uneven in places, and I had gotten a few purls and knits mixed up. The proprieter at the knitting store said I should block it.

Blocking is taking your finished product and soaking it in tepid water (and I added this soapy stuff the women recommended) for a period of time. Then you rinse and gently squeeze out the excess liquid. You roll the knitted project in a towel to dry it more. Then you stretch it out, or mush it together, to be the exact shape you desire at the end. Here’s the scarf blocked out: 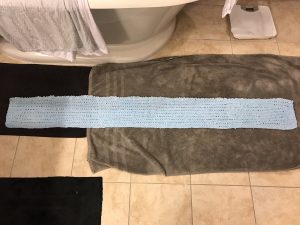 It’s so even and straight! The crazy part is, when the scarf dried (about a day), IT WAS THAT SHAPE. Blocking is magic. Here it is in its natural setting: 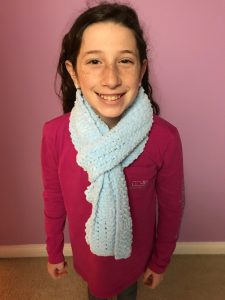 That’s when I fell in love with knitting.

I got more ambitious. I wanted to make a hat. So I went back to the yarn store, this time with the whole family in tow. The proprietor was MUCH nicer this time. I think she realized I was in it for real. It didn’t hurt that I brought the scarf with me to show her. She took a lot of time, showed me some patterns and yarn, and I left the store with a bunch of stuff. I know I could have downloaded a pattern for free, but I wanted to support the local business. This time, my oldest (Jacob) would be the recipient of the hat. Noah (my middle child) was going to knit his own scarf. He’s usually the one who joins me on these learning experiences. He got into meditating, too.

A hat requires you to knit in the round. The first reason is that you need to make a circle, not a flat row. The second reason is that a hat’s diameter is usually longer than any straight needles could hold. You use round needles, which are shorter needles connected by a wire, so that each time you transfer a stitch from left to right, it starts to travel around the circle back to the left tip. You never knit from the right needle to left. I did this is 2×2 ribbing, which means that you do 2 knits, 2 purls, repeat – all the way around. Ribbing is good for hats because it stretches nicely. I was pretty proficient at this point, and made rapid progress: 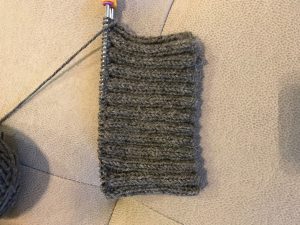 I then switched yarn to blue, which went really well! 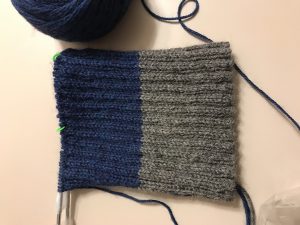 Those little green things you see are markers to tell me when I’ve hit the end of a “row” or need to remove a stitch to close the hat. You wind up knitting two stitches into one using various techniques to make things even. Eventually, there was too little hat to use the round needles anymore, so I had to switch to double pointed needles: 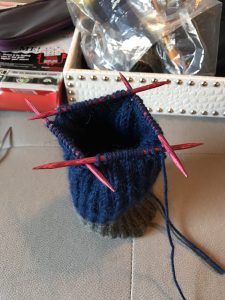 And then I finished. This hat rocked. First of all, I was good enough now to know how to recognize knits and purls, so that there were no mistakes. I was also good enough not to panic, like when the metal needle detached suddenly from the wire, and things almost fell apart near completion. I knew how to fix mistakes. Plus, I had gotten pretty even with my stitches, so that things looked nice! Here is the hat, blocked out and drying on a football: 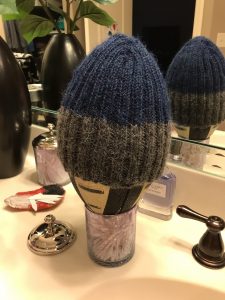 And here’s a nicer look at it: 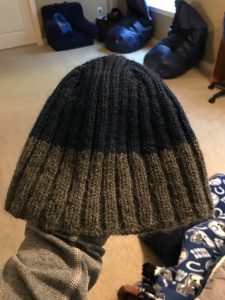 And here it is, in its natural setting: 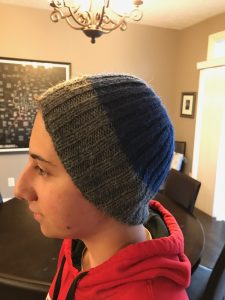 I am RIDICULOUSLY proud of this hat. It’s a fricking hat! It looks professional. It’s basically made from one long string. And there is not one knot in this hat. All the ends are sewn in.

With little time left in the month, I had time for one more project. I wanted to make some socks for Aimee. Unfortunately, I made the mistake of not going to the yarn store last Saturday (lazy) and then found out on Sunday it’s closed. So I had to settle for another project I decided to make a small bag for Sydney, since this would also focus on some sewing skills.

I found a pattern in Stitch ‘n Bitch, the only other book I bought. This book I recommend as a nice companion. I got little out of it the first time I read it, but it was very useful as an aid when I wanted to go back and check things. Nice tips on fixing mistakes and such. A bunch of useful patterns. And when you want to a quick refresher on any topic, it’s in there. Buy it if you knit. 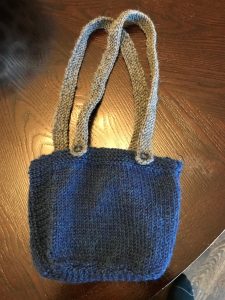 That’s after blocking on a shoebox lid. Note the detail where I attached the straps to the body. I think the inch of garter makes a nice contrast to the stockinette, too. Well done, Stitch ‘n Bitch! Here is the bag in its natural habitat: 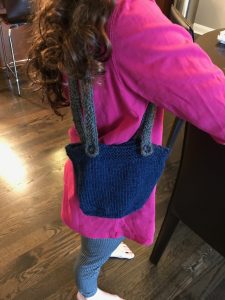 I can make jokes about knitting all day, but I really loved this. My mother used to be a Home Economics teacher, and I can remember doing things like needlepoint as a kid. When Sydney got into Rainbow Loom a few years ago, I enjoyed doing that with her, too. But knitting rocks. It’s really versatile, you can make all kinds of things, and once you get going, you can really move. The hat took two weeks, even with lots of other things to do, and I bet I could do it more quickly next time. The bag took a week.

Plus, there’s something satisfying about making something with one string of yarn and two needles. It’s magic. I think I’ll likely start making things for people as gifts. I’ve already had requests for hats. And it’s something to do, when I’m sitting around watching TV or on a plane. I don’t care if people stare. Knitting won. Two months very well spent.

If you’re going to try, here are the tools I recommend. It’s anecdote, but it’s what I used:

tl;dr: YouTube is the way to go to learn to knit. Videos like those from ExpressionFiberArts are invaluable. A nice resource to have is Stitch ‘n Bitch.