According to Wikipedia, RSS stands for “rich site summary,” but most people know it as “really simple syndication.” And Google made it look simple, really simple. Feedly, the most recommended alternative to Google Reader, doesn’t quite.*

Don’t get me wrong. Some things about Feedly I like. It syncs across iOS, Android, and web versions. I can use it at work (no small feat — don’t get me started). The sharing options are much nicer than Google Reader’s, for example, but that’s mostly cosmetics. And you can make it almost look Google Reader-like, in the sense of listing posts without popping out charts for a magazine look-and-feel. (Seriously, if I want a magazine I will buy a magazine! I don’t understand why most of the RSS aggregators out there are trying so hard to be Vogue.)

One thing I do not like about Feedly is that it can’t seem to get chronology right. I’ve tried numerous settings, but scrolling down through my feeds with any of them shows some problems. Like this, for example: 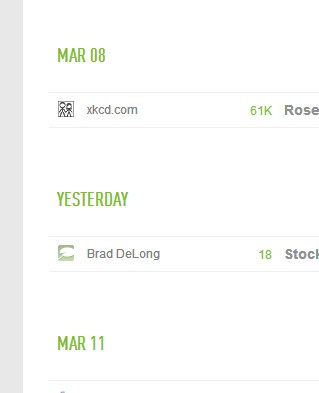 Yesterday may be many things, but between March 8 and March 11 it was not. Moreover, obviously my scores of feeds included more than one post by Brad DeLong yesterday and more than one by xkcd on March 8. Other posts from those dates are scattered about, interleaved variously with posts from other dates. To be clear, most posts are in the right place, but some aren’t. That’s annoying. It’s not what one would expect from “really simple syndication.”

Meanwhile, I am also attempting to test Newsblur,** which is supposed to be the most Google Reader-esque of non-Google readers. I splurged for the premium version ($12/year). It has cross-platform capability, but it’s not working yet, not anywhere. Its Twitter feed says they’ve been slammed with demand since the announcement of Reader’s sacking. So, I will test it as they add more capacity. Between you and me, I hope they’re awesome and make a bazillion dollars. I know Google doesn’t need the money, but I’d have spent it on them anyway. All they had to do was ask.

PS: Google, I still hate you.

*Feedly isn’t really an alternative yet. The current version rides on top of Google Reader. So, if Reader goes, so does Feedly. But, Feedly claims it will have a stand-alone version ready before Google Reader is toast.

** Unlike Feedly, Newsblur really is stand alone. Once you migrate your subscriptions, you’re not tied to Google Reader at all.

UPDATE: I think I answered my own question about Feedly’s chronology. See my tweet.