Do you really care about spending?

Every time I offer a way to reduce health car spending that doesn’t involve cost-shifting, someone argues that if we spend less, the quality of health care in the US will decline. Let’s just ignore the fact that our quality is pretty crappy for what we’re spending already, implying that other countries have already figured out how to spend less and maintain, if not improve, quality. Let’s just run with this sentiment.

If you believe that spending less in a sector will lead to less quality, then you have to believe that the current spending is justified. Sometimes, I’m baffled by this belief. For example, let’s take pharmaceuticals. 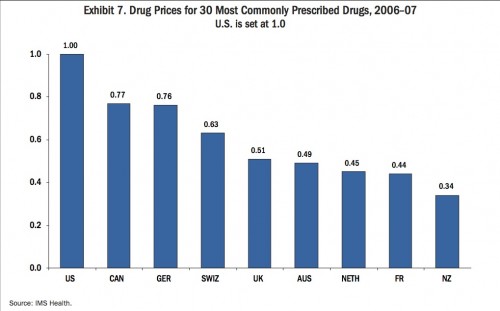 This is a comparison of the drug prices for the 30 most commonly prescribed drugs in the world. As you can see, people in the US pay far more for those drugs than any other country. We pay twice as much for those drugs, on average, as the UK, Australia, the Netherlands, France, and New Zealand.

Think about that. The drugs don’t work any better here. The molecules in them are no different. You can’t argue this is about choice or freedom or formularies, since this is a comparison of the same drugs in each country. We just pay more for them. A lot more.

One argument at this point are that we have to pay more so that other countries, which are not as rich as we are, can pay less. Is that your argument? Are you feeling rich right now? Is the country? Moreover, if you feel this way, why not just increase foreign aid for the purchase of drugs and stop making people accessing the health care system pay for foreign aid.

Another argument is that we in the US are so rich, we should subsidize research for new drugs* by paying higher prices. Is that you argument? See above about being “rich”. Again, if you feel this way, why not raise our taxes and pay pharmaceutical companies to do research and stop making people accessing the health care system pay for business investment.

If we feel the need to support the pharmaceutical industry and the rest of the world, that’s fine. Vote to send money overseas and vote to give money to drug companies. This is America, and that’s your right. But why – in a “free market” – are we paying so much more than everyone else in the world for the same exact pill?

Do you really care about health care spending? Then fix this. Or, go ahead and justify it. Tell the American people that they are so rich, their economy so robust, that their drugs need to be “taxed” for foreign aid and investment in big companies.

*Not to mention that if you look at the list of most commonly prescribed drugs, many are me-too drugs, did not require significant research, and don’t need your subsidization. But that’s an argument for another day.