Looks like every 6-18 months or so I have enough fodder assembled to warrant a round up of cost shifting claims or takedowns. Here’s the latest:

Unable to afford regular checkups and preventive care, the uninsured often waited until they were very sick before seeking attention at hospital emergency rooms, where more advanced illnesses meant more expensive treatment. Hospitals made up for this uncompensated care by increasing prices for insured customers, which further jacked up premiums.

2. My tweet last February (which will auto-delete shortly*) about a Sarah Kliff piece: 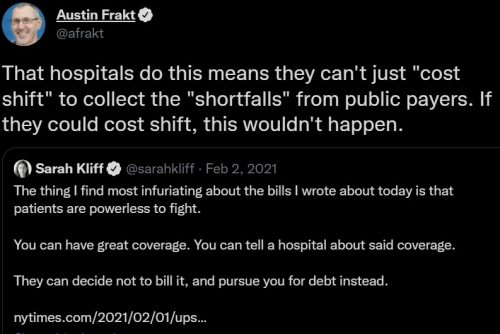 The cost shifting theory persisted for a long time without being examined very rigorously. […] Economists [didn’t believe it] because it is difficult to come up with a rational economic model of cost shifting, but their objections were drowned in a flood of anecdotes.

In the mid-2000s, data on private payments began to become available. A series of studies by the Medicare Payment Advisory Commission and by academic economists found that hospitals did not cost shift. On the contrary, when public insurers reduced their payments, private insurance payment levels tended to decline as well.

We raise the possibility of “consolidation-induced cost shifting,” which recognizes that changes in public prices for hospital care can affect market structure and, through that mechanism, affect commercial prices. We investigated the first leg of that argument: that public payment may affect hospital market structure. After controlling for many confounders, we found that hospitals with a higher share of Medicare patients had lower and more rapidly declining profits and an increased likelihood of closure or acquisition compared with hospitals that were less reliant on Medicare. This is consistent with the existence of consolidation-induced cost shifting […]

After big revenue losses due to biosimilar entry in the EU but not US, we don't see offsetting revenue increases in the US.

* I use TweetDelete to delete tweets after a year.