Bigger health companies: Good for Medicare, maybe not for others

The following appeared on The Upshot while I was on vacation (copyright 2014, The New York Times Company).

Although Obamacare’s health insurance expansion has directly provided coverage to only about 4 percent of Americans, changes embedded in the Affordable Care Act could affect many more people, and not always in good ways.

One such change is a provision that allows organizations that join forces to manage care for a large population to receive bonuses from Medicare for controlling costs and hitting quality targets (or face penalties if they do not). Medicare’s Accountable Care Organization model, as it’s called, favors larger health provider organizations that can manage the costs and quality of all types of care Medicare pays for, from primary care to high-intensity hospitalization and everything in between.

If that model works, it’ll be welcome news for Medicare and its beneficiaries. But health economists, myself included, have long worried about what larger provider organizations mean for private health insurance plans, the ones that serve most Americans under 65, through employer-based coverage or policies purchased on the Obamacare exchanges.

Larger organizations have greater market power to demand higher prices from those plans for doctor visits and hospital stays. And higher prices paid by plans translate into higher premiums for consumers. (This doesn’t apply to Medicare because its prices are set by the government, and no provider organization has so much market clout that it can force Medicare to raise prices.)

The competitive advantages of greater size and scope are not lost on health care organizations: Bigger is better for the bottom line. In the past, hospitals and physician groups have merged with one another and with insurers to form larger organizations that command greater market clout and drive up private prices and premiums. A wave of hospital mergers in the 1990s was followed by accelerated costs of care in the 2000s. Researchers have generally found that hospital consolidation has increased price without commensurate increases in quality. 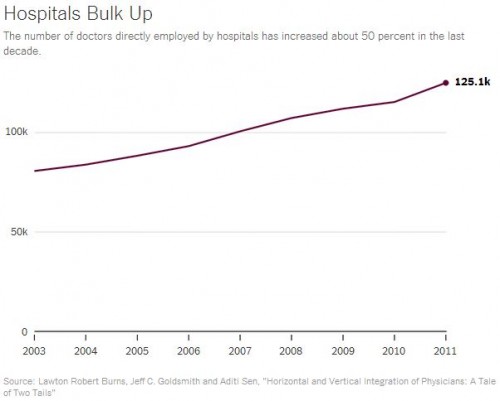 A more recent trend has been the direct employment of physicians by hospitals. When hospitals hire physicians or assimilate physician practice groups, they seek to capture more physician referrals and gain greater leverage over insurers in negotiating prices for access to both hospitals and doctors.

Recent work by scholars from the University of Pennsylvania highlights the trend in hospital employment of physicians. As the chart shows, the number of doctors employed by hospitals increased to over 120,000 from 80,000 between 2003 and 2011. About 13 percent of all doctors are now employed directly by hospitals. Other work by Stanford researchers shows that the integration of hospitals with physicians in this way has increased the prices paid to hospitals by private plans. Though these studies predate the law encouraging larger organizations, it’s a reasonable bet that the consolidation trend has continued.

So while some provisions of the health reform law — like penalties on hospitals that have a high proportion of Medicare patients who must be readmitted within 30 days of a hospital stay — may already be improving care and health system efficiency, others, like this one, bear watching. What is good for Medicare and its patients may not always be good for the rest of Americans.