Today in the Washington Post, Alec MacGillis has an article about the Carilion Clinic’s provider network in Roanoke, Virginia (h/t Ezra Klein’s Wonkbook).

Carilion owns the two hospitals in town and six others in the region, employs 550 doctors and has set off a bitter local debate: Is its dominance a new model for health care or a blatant attempt to corner the market?

Carilion says it represents an ideal envisioned by the nation’s new health-care law: a network that increases efficiency by bringing more doctors and hospitals onto one team, integrating care from the doctor’s office to the operating room. The name for such networks, which the new law strongly promotes with pilot programs, is accountable care organizations, or ACOs — providers joining together to be “accountable” for the total care of patients, with incentives from insurers to keep people healthy and costs down. …

But skeptics apply a more old-fashioned term to networks like Carilion: monopolies, which they say will make health care even more expensive.

The article goes on to speculate about implications of provider integration for costs, quality, and prices. Turns out Cory Capps, economist and published expert on the implications of hospital consolidation, recently shared a working paper with me that pertains to these issues, at least with respect to hospital consolidation. He has authorized me to use its content in blog post.

Let’s begin with some history. Capps takes us back to 1997. 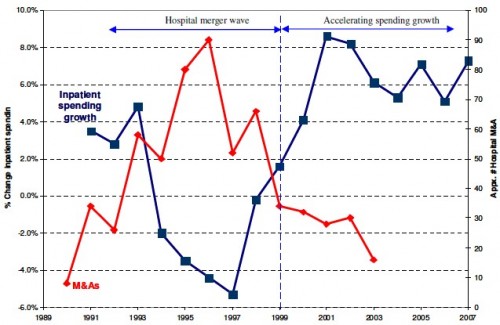 The figure shows that the hospital industry experienced a wave of mergers in the 1990s and the rate of inpatient expenditures increased thereafter. A common explanation for these phenomena is managed care. As managed care peaked in the 1990s, hospital price competition intensified, pushing hospital costs and prices downward. Hospitals responded by merging to achieve economies of scale and scope while increasing bargaining power. After the managed care backlash, price competition was lower because of looser networks and increased hospital market concentration following the period of mergers.

Vogt and Town conducted a survey of literature on the relationship between hospital consolidation and concentration and costs,quality, and pricing. Capps summarizes the findings in each of these dimensions.

Costs. “Overall, Town and Vogt’s conclusion from their survey of the cost literature as follows: ‘[t]he balance of the evidence indicates that hospital consolidation produces some cost savings and that these cost savings can be significant when hospitals consolidate their services more fully.'”

Quality. “The majority of studies to date, however, conclude that hospital mergers and acquisitions have either no effect or a modest negative effect on quality, with the former finding being the more common.”

Pricing. “There is substantial evidence that hospitals compete within a fairly narrow geographic area, often smaller than a city or an MSA. Mergers within such a narrow area can lead to substantial price increases. Increases are most likely if the consolidation combines hospitals that, from the perspectives of insurers assembling provider networks, are close substitutes.”

If hospital mergers have such a significant effect on prices, why didn’t antitrust regulators do something? Well, they tried and failed, until they gave up. Capps:

From 1993 through 1998, the FTC and DOJ lost six consecutive hospital merger challenges; in 2001, the State of California lost a seventh. In the decade after the last of these losses, 1998 to 2008, neither the FTC nor DOJ challenged a prospective hospital merger in court. Over the 15 years spanning 1993–2008, antitrust policy likely had little restraining effect on hospital mergers over this period.

In an e-mail Capps explained to me that he was deliberately conservative in his estimate, both in its calculation and in its presentation. There are reasons to think the increase in health care costs due to hospital concentration is higher and more significant:

Bottom line, hospital consolidation matters, increasing health care costs by tens of billions per year and, in general, not delivering higher quality. It’s not the only factor in health care prices, and it may not be the most important one. But it is arguably pushing hospital prices for private payers up by at least 5% nationally.

Will wider integration of hospitals and non-hospital based physician groups, such as that achieved by Carilion, improve quality without increasing prices? It remains to be seen.