Dr. Harvey Fineberg is the president of the Institute of Medicine of the National Academies of Science. In a recent editorial in JAMA, he raises concerns about the decline in funding for the National Institutes of Health (NIH).

Viewed in constant dollars, apart from the 2-year ARRA infusion, the budget of the NIH has declined every year since 2003.

Here is the trend that worries Fineberg: 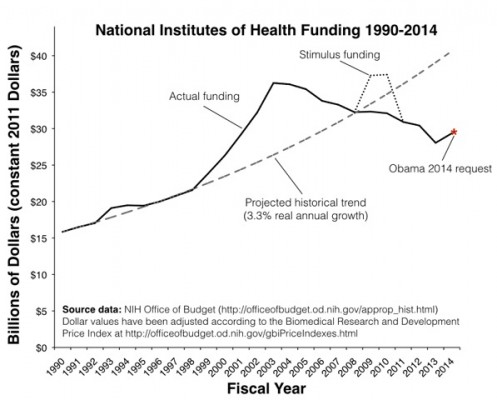 Fineberg calls for “[a] new social compact for health care research” between scientists and the public. The public, he fears, has diminishing trust in science. To return the funding stream to stable growth, scientists have to restore this trust.

Why is the public indifferent to the decline in federal support for health science? Perhaps there is growing distrust of science, but my bet is that most people are simply unaware that funding is dropping. Hence my posts!

Nevertheless, Fineberg is right that support for science funding rests on a congruence of values between scientists and the public about why science is done and what kinds of science are needed. I don’t have data, but I will speculate that the public misunderstands the significance of health research in at least three important ways.

First, the public overestimates the efficacy of contemporary medicine and in part this is because they overestimate the proportion of treatments that have a strong evidential base. A friend who is an historian and a cancer patient told me that he had recently heard about the movement promoting “Evidence-Based Medicine.” He was shocked: “I thought it was all evidence-based.” Unfortunately, many important treatments rest on a shred of data and a plausible rationale. We need empirical trials to sort out what delivers real benefit from what seems like it ought to work.

Second, I do not think the public understands that there are emergent health risks that we lack the tools to address. We are facing a health crisis associated with the end of the antibiotic era. Mental health disorders are highly prevalent, but we have not had a fundamentally new psychopharmacological medication or an innovative form of psychotherapy in decades. We have reason to expect the appearance of a novel, lethal, and highly contagious strain of influenza — and we may not be ready to defeat it if it comes.

Finally, I fear that the public frames spending on health research as consumption, and may decide that in hard times we need to cut it. My guess is that the public (correctly) views much of government spending as paying for consumption, e.g., payments to Social Security recipients. Rightly or wrongly, many citizens are troubled when the government is in deficit, because it seems profligate to finance consumption through debt. If these citizens also view federal research spending as a form of consumption, then cutting research spending may seem necessary and even conscientious. (Perhaps some people imagine that research funding is a kind of sinecure for academics. It is anything but, as Aaron makes clear here.)

But Fineberg argues that spending on health research should be understood not as a form of consumption but rather as an investment in future health care technology.

While the United States must come to grips with its crushing debt burden, and the costs of health care are no small part of the problem, mindless reductions in scientific research are not a sensible part of the solution. The monies spent on delivering health care should not be confused with investments in research to improve health. The next generation bears the burden of today’s debt, yet the next generation also stands to be the beneficiaries of today’s research investments. If there is any area of government expenditure that passes a moral test of justified borrowing from the future to finance work today, it is scientific research. Even better, of course, is that the current generation bears the cost today and bequeaths the fruits of research as a gift to the next generation.

There’s more to say. The careful reader will note that I have not addressed the crucial issue of funding — or lack thereof — for comparative effectiveness research.

Disclosure: I have received research funding from NIH through most of my career, beginning with a fellowship in graduate school.