A little bit more about the RAND health insurance experiment

Perhaps non-bloggers will never know how valuable it is to blog first about the things one intends to write and speak about. At the risk of public embarrassment, one can receive a lot of good feedback, provided subject matter experts are reading one’s blog, as they are this one. (I know this from comments and e-mails.)

Thus, this is another of my posts leading up to my brief talk to Princeton University Woodrow Wilson School undergrads early next month (see also, this one and that one–yes by Aaron, but relevant to my talk). Below are some of the conclusions of the RAND health insurance experiment. I’m going to focus mostly on the effects of cost sharing on utilization and health, somewhat short changing their effects on appropriateness and quality of care. There are other results too (many, many others), but I’ll only have 20 minutes of an overall 45-minute presentation to devote to the RAND HIE. I can’t say everything. The following is based on a nice, brief summary paper on the experiment.

Doctor visits are clearly sensitive to level of cost sharing (see figure immediately below). The biggest difference is between the zero and 25% coinsurance levels. More modest reductions occur for higher coinsurance levels. All differences between the zero coinsurance plan and the other plans are statistically significant (in subsequent charts too). On average, cost sharing reduces doctor visits by 1-2 per year. Declines were similar for other services (e.g. dental visits, prescriptions, mental health treatment). 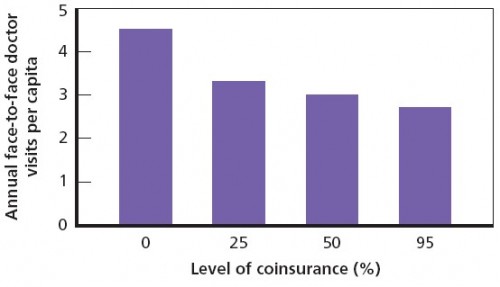 Hospital admissions are also responsive to cost sharing level (next figure). Again, the biggest difference is between the zero and 25% coinsurance levels. At the 95%  level, hospitalizations increase relative to the 50% level, but that’s not a statistically significant difference. Overall, cost sharing achieved a 20% reduction in hospitalizations. 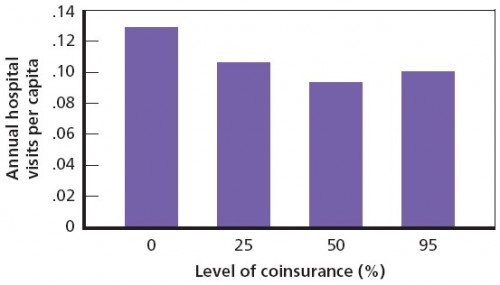 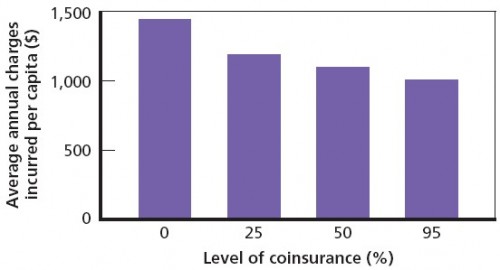 It is important to keep in mind that the RAND HIE did not include participants over 64. One should be cautious about drawing conclusions from the RAND HIE results for the Medicare population. In fact, a recent paper concluded that the effect of cost sharing on the elderly are very different, in particular that higher outpatient cost sharing for an elderly population leads to increased inpatient utilization. No such “offset effect” was found in the RAND HIE.