This post has been cited in the 16 September 2010 edition of Health Wonk Review.

Let’s start with this: 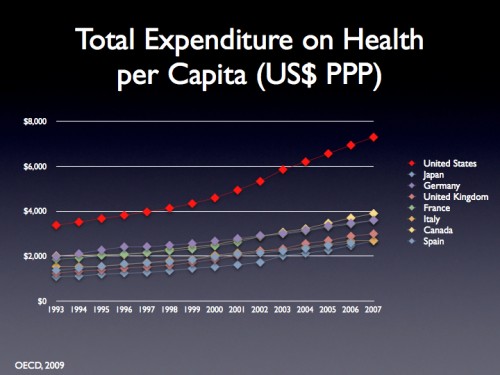 That’s the cost, per person, for health care in eight of the ten richest countries in the world.  That’s per person.  In other words, that includes all the people with no insurance, all the people who have no access to the system.  And still, we spend about two to three times what all these other countries spend per person on health care.

When confronted with numbers like these, people feel a need to find a reason.  They need something to blame.  And no one ever wants to blame the system.  So we blame it on something else.  The blame du jour seems to be the obese.

We know that obesity contributes to health-care costs at the population level. Obese people tend to have higher rates of a wide range of diseases than people who maintain a healthy weight; as the percentage of Americans who are obese has increased, so has the disease burden.

Now, a new report from the CBO points to a related phenomenon that looks like a pretty big deal: The extra health costs for each obese person have skyrocketed in the past few decades.

I don’t want to minimize obesity, OK?  It’s a huge problem and I have covered it before.  Don’t walk away from here thinking I’m saying anything else.

But it’s not the cause of our health care cost problems.

Check this out.  It’s from a McKinsey & Company study, Accounting for the cost of health care in the United States: 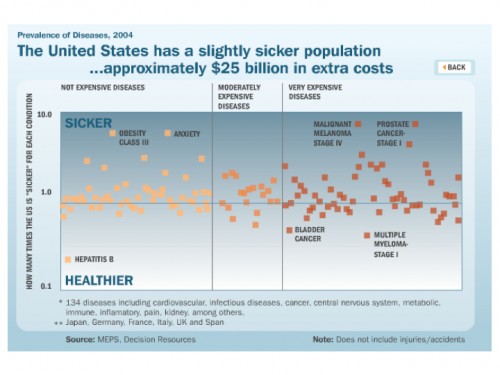 Let me orient you.  Diseases which are more prevalent in the US relative to other countries are shown by points near the top.  See Obesity there?  It’s high, because we’re very obese.  However, diseases that are more expensive to treat are towards the right.  So, Multiple Myeloma is less common in the US and expensive.  That should help out our overall costs.  Hepatitis B is also much rarer in the US.  But it’s not nearly as expensive to treat, so it doesn’t help us out much.

Obesity isn’t that expensive, either.  It’s not driving our costs.

Before you start in on me about how obesity is linked to other things and such, you should know that the overall McKinsey & Company analysis showed that the prevalences of disease in the US could account for perhaps an extra $25 billion in health care spending.  Let me make a new chart for you: 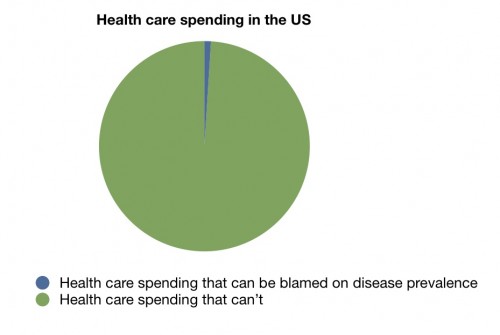 Yes, obesity is more prevalent in the US, and yes, caring for it costs real money.  But even if we get obesity down to the levels in other countries, it’s not going to magically erase the problem.  We are spending two to three times per person what they are.  There is no simple fix here.  There is no one, and no thing, we can easily blame.