You have not become who you will always be

I did not expect my children to express sadness around their birthdays. As they’ve aged they’ve been better able to articulate why. “I don’t want to grow up,” they’ve told me, crying. Crying!

Their emotions are mixed. Birthdays are exciting, and they have a good time too. But the sense of the gradual, inexorable chipping away at their youth is palpable, even to them, as it is to me.

I’m 42. I get it. I don’t want to age anymore either. This is a common feeling among adults. I guess kids feel it too, or my kids anyway. Maybe it’s genetic, because I was the same when I was young. I recall trying to hang on to what it felt like to be five as I turned six, then seven, then eight, …

Despite my attempts, I could not do it. My brain aged with my body, and my mind changed with it, as it should. Not only did the memories fade, but so did the feelings. At some point I could not conjure up the sense of fiveness. It was gone.  Completely gone. And I was sad. I could never go back, not even in my imagination, and this inevitable irreversibility is not what I wanted.

As a teenager, perhaps 15, I recall discussing something like this with my wonderful and wise step-father. When he realized what I was getting at he asked me what was so special about being young. My answer was paradoxical, “Because you change a lot when you’re a kid. Your mind changes, and that’s fun. It’s interesting.” I wanted to stay young precisely because I enjoyed the rapid change of growing up. Perhaps fiveness was exciting to me because there was so much newness, so much change. But to experience it also ment gradually becoming not five.

Then my step-dad said something important that I will never forget. “You think adults don’t change?”

“Oh no! Anybody can change. Personal growth does not stop when you’re a grown up.” I believed him because I had learned that he’s usually right. And now I know from experience that he spoke the truth.

Without knowing it, my step-dad and I were discussing the end of history illusion. This is the phenomenon that when one contemplates the future—the next decade, say—one tends to imagine very little change in one’s personality, values, and preferences. However, when one thinks back over the past decade, one recognizes considerably more change. The amazing thing is that, according to work by Jordi Quoidbach, Daniel Gilbert, and Timothy Wilson, this discrepancy between the predicted change in the future and the recognized change in the past exists at every age.

Throughout their lives, people “regard the present as a watershed moment at which they have finally become the person they will be for the rest of their lives.” There is no more growth, we think. But we’re always wrong. This is the end of history illusion.

In a sequence of studies, Quoidbach, Gilbert, and Wilson compared people’s predictions of change in personality, values, and preferences over the next ten years with recollections of people ten years older about the prior ten years. For example, they compared how 20 year olds thought they’d change (or not) to how 30 year olds had actually changed over the same decade of life, 20-30. They did this for every age between 18 and 68 years old. The charts below, based on metrics of changes in personality, values, and preferences, summarize their findings. 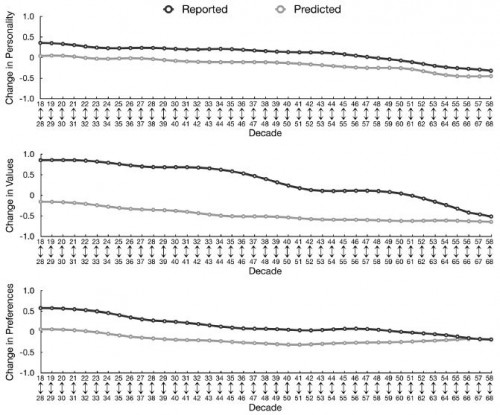 As the chart shows, reported changes were above predicted changes for all ages except after age 55/65 with regard to preferences. This suggests that we change as we age a lot more than we expect to, which is what my step-father was telling me. The charts also show that we do change less over time, just not as much less as we think.

“Time is a powerful force that transforms people’s preferences, reshapes their values, and alters their personalities,” the authors wrote.

When I get sad about aging, this insight brightens my mood. It’s not over! Of course I will never be five or even feel fiveness, but I’m not done experiencing the very thing I cherished about youth: change.

My kids aren’t either, despite what they may think.

If you are sad at birthdays because it means the end of the personal growth you’ve been enjoying, you’re wrong. You have not become who you will always be.

Watch Dan Gilbert explaining the end of history illusion in his TED talk: