Yes, there is a shortage of primary care doctors

Jessica Marcy has a piece out at Kaiser Health News on how the increased Medicaid coverage under the PPACA is scaring people because of the shortage of primary care doctors in some areas:

States in the South and Mountain West, which traditionally have the lowest rates of primary care physicians, could struggle to provide medical services to the surge of new patients expected to enroll in Medicaid under the health overhaul and federal incentives may not provide much help, according to a report issued today by a Washington health research group.

The study, by the Center for Studying Health System Change, noted that many of the states with low numbers of primary care doctors per capita are also expecting some of the highest percentage increases in Medicaid enrollment. The study’s author — Peter Cunningham — estimated that Medicaid programs could grow by as much as 38 percent in states with low rates of primary care physicians, while only about 15 percent in those states that have high rates of the doctors—those in the Northeast and the Mid-Atlantic regions.

“Things are probably not going to be pretty in those states that have a hard time” recruiting primary care doctors, said Alwyn Cassil, the center’s director of public affairs.

I’m going to ask for a pause in the conversation here. Longtime readers know I get frustrated when a problem that already exists (and has for some time) gets blamed on reform. Yes, we do have a primary care shortage in the United States. But it isn’t new, and it isn’t because of the PPACA: 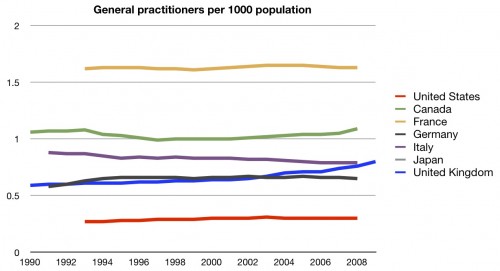 We have fewer – far fewer – pediatricians, general internists, and family physicians per population than any other comparable country. Moreover, as you can see from the chart above, this issue stretches back over years, if not decades. It’s just not new.

If you want to fix this, I’m all for it. Refusing to do so, and then complaining about an increase in coverage to the uninsured because the problem exists is a bit cynical, though.

Anyway, back to the article:

Many physicians currently do not accept Medicaid patients or limit the number they will see, saying the reimbursement rates are too low. That has raised concerns about whether the new enrollees will be able to find doctors.

I know there’s an anti-Medicaid current in the news and general psyche right now, but this is a problem for everyone, not just Medcaid. There’s been a primary care shortage in the past, there is one now, and there will be one in the future whether we increase Medicaid enrollment or not. If we just gave everyone private insurance, there would be a shortage.

In fact, the shortage can be used as a reason not to give anyone insurance in the future, because it will make the shortage worse. Is that the argument people want to make? We shouldn’t reduce uninsurance at all because there aren’t enough docs?