Why the Plan B decision matters

I’ve spent much of the last two weeks irked about the administration’s politics-over-science decision to overrule the FDA ruling allowing Plan B to go over the counter. There’s a new study in JAMA* that adds further evidence to the notion that the status quo is a problem:

METHODS: From September to December 2010, female research assistants posing as adolescents who recently had unprotected intercourse were randomly assigned to call every commercial pharmacy in Nashville, Tennessee; Philadelphia, Pennsylvania; Cleveland, Ohio; Austin, Texas; and Portland, Oregon. We chose cities in geographically diverse states without pharmacy access laws that supersede uniform federal regulations. Lists of pharmacies were obtained from state boards of pharmacy. Calls were made weekdays between 9 AM and 5 PM, when pharmacies would presumably be fully staffed. Callers followed standardized scripts (Figure; details available on request) to simulate real-world calls and elicit specific information on emergency contraception availability and access. We examined same-day availability of emergency contraception, whether emergency contraception could be accessed by the caller, and whether the pharmacy communicated the correct age at which emergency contraception is accessible over-the-counter.

As of now, any female age 17 or older can buy Plan B over the counter if they can show proof of age. The argument for making the drug completely over-the-counter is that it works best when taken soon after sex. Delays of hours, let alone days, can make a significant difference. So this study (which was brilliant in its simplicity) got women to pose as adolescents (age 17) to call pharmacies to see if Plan B was available to them. If they were told they couldn’t have it, they asked how old you had to be to get it. Here’s how the pharmacies fared (there’s probably a paywall): 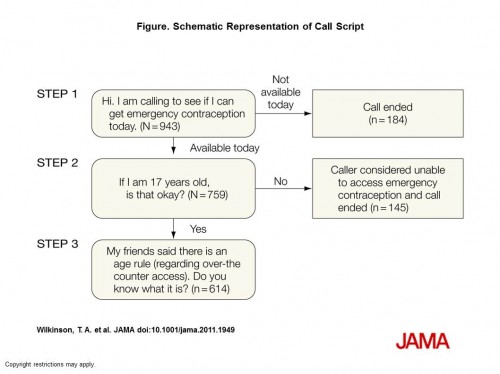 Let’s start with the fact that during the 943 attempts, nearly 20% of callers were told that they couldn’t get emergency contraception even before they revealed their age. Was that because the pharmacy didn’t have any in stock, or because the person on the phone didn’t want to give it out? We can’t say. But requiring a physician to fax or email in a prescription ahead of time when there’s a 20% chance that the medication won’t even be available? That’s a problem.

It gets worse. If they did have the drug available, which occurred 759 times, once callers revealed they were 17 years old, almost 20% were told that they couldn’t have emergency contraception. Legally, of course, they could have. But they were “misinformed”. further analysis looking at the relative income of people living near the pharmacy found that people who lived in poorer neighborhoods were more than 60% more likely to be incorrectly told they couldn’t have the drug because they were too young than people who lived in more affluent neighborhoods.

So let’s recap. Plan B is either unavailable or “hidden” in 20% of pharmacies. When it is available, people at the pharmacy are misinforming 17 year olds that they can’t have it anyway 20% of the time. They seem more likely to do so in poor neighborhoods, where a disproportionate number of teen pregnancies occur. All of this would be improved if the drug were just known to be available over-the-counter for everyone.

*Full Disclosure: Health Services Research is a small world, and I know a number of the authors personally. One is an old and close friend. None of this lessens the quality and importance of this work. Further, I know that Tracey Wilkinson, the lead author, is finishing up her fellowship this summer, and any program would be incredibly lucky to hire her.