Why the ACA is not enough

Earlier this month, in the New York Times, Ezekiel Emanuel authored a column titled “Less Than $26 Billion? Don’t Bother.” In it, he argued that changes to the health system that save that amount of money or less per year barely count as reform. The reason is that $26 billion, as large as it sounds, is a mere 1% of the nation’s annual, collective health care bill. Emanuel came down pretty hard on small ticket items for being small ticket items. He did, however, note in passing that such reforms, as part of a broader package — one that, presumably, saved a lot more — may be worth considering. In a subsequent column, he suggested more than 1% could be saved by streamlining billing and record keeping; in another he discussed bundled payments. (A side point: one should be wary of too great a focus on the size of cost savings. Some proposals that may not save much, or even add to costs, may be worth considering on other grounds.)

Bundling many small savings in a larger package is, I would imagine, the argument Emanuel would make in defending his own promotion of small ticket items, expressed in the summer of 2010 with Peter Orszag. In an article in NEJM [1], the two defended the Affordable Care Act (ACA), ticking off the following savings it included:

Note that the annual savings from each of those, or even all of them together, is far below the $26 billion threshold Emanuel set in the New York Times. Still, I think Emanuel would argue they are worth implementing. Additionally, the package to which they belong includes $610 billion in net savings and revenue associated with Medicare over 10 years, as documented by Chapin White, a former CBO analyst who helped score health reform. ($210 billion of the $610 billion are new Medicare hospital insurance tax increases on high-earners.) Perhaps we should be a bit more tolerant of small ticket items, while admitting that, no matter who proposes or defends them, they aren’t going to solve the big health spending problem.

Elsewhere in their NEJM piece, Orszag and Emanuel argue that the Cadillac tax will also reduce health care spending and even its rate of growth (“bending the cost curve”). That tax, as you may recall, is an excise tax on high premium plans that is to go into effect in 2018. In a somewhat crude way it will have the effect of approximately reversing more and more of the excludability of employer-sponsored health insurance premiums from income and payroll taxation. It is expected to cause insurers and companies to offer less expensive plans. One hopes it provides incentives for delivery of health care and health benefits more efficiently. Most likely, it will lead to higher cost sharing as well (larger deductibles and copayments) since that is the simplest way to reduce premiums.

This greater “skin in the game” should not bother those who think health care is overused or that the purchase of health services lacks the attention from consumers it warrants. Nevertheless, if the Cadillac tax is to bend the cost curve, the way it will probably do so is by shifting costs from premium-financed to cost sharing-financed. I’m not certain that is clear in everyone’s mind. It certainly was not expressed by Orszag and Emanuel. I’m not certain this cost won’t harm health since consumers are generally unable to distinguish necessary from unnecessary care. I’m also not certain consumes will enjoy it, even paired with relatively higher wages that should accompany the shift. The connection between compensation in insurance and in wages is opaque to most workers.

Orszag and Emanuel also survey the other, potentially curve-bending mechanisms in the law: IT enhancements, comparative effectiveness or patient centered outcomes research, ACOs, bundled payments, reduced payments due to hospital readmissions and infections, IPAB, etc. Will all this work? Will any of it? Perhaps, but if it does, it may only have modest effects. David Cutler, Karen Davis, and Kristof Seremikis [2] estimated the size:

We estimate that, on net, the combination of provisions in the new law will reduce health care spending by $590 billion over 2010–2019 and lower premiums by nearly $2,000 per family. Moreover, the annual growth rate in national health expenditures could be slowed from 6.3 percent to 5.7 percent.

It sounds like a lot. It really isn’t, especially when you consider that total health spending over that period is likely to be about $35 trillion, in rough figures. Note that $590 billion is only about 1.5% of $35 trillion. That’s a bit more than Emanuel’s 1% threshold, but not a lot more. 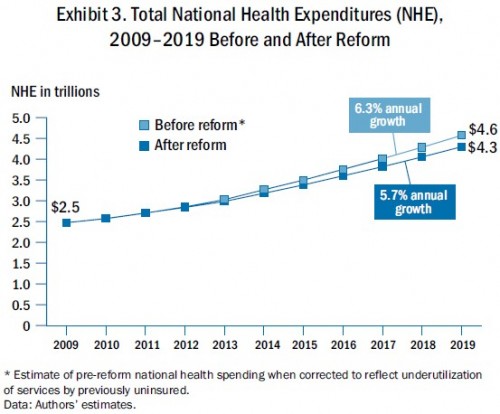 Still, it’s a start and, if it comes to pass, some might be grateful for the savings. But if one is concerned about health care spending swallowing up federal, state, firm, and family budgets, it is not enough. More reforms and innovations will be needed. Where will they come from? We could look oversees, where public financing and control of health spending plays a proportionally larger role than it does in the US.  Jonathan Oberlander [3] urges us to do so.

[I]nternational experience suggests that other nations do know how to slow medical spending; the United States is simply unable or unwilling to adopt those policies. Americans are, in other words, determined to try all available cost-control options — except those that actually succeed elsewhere. Ultimately, the insistence that the United States has to try everything because nothing is certain to contain medical costs sounds less like agnosticism or intellectual curiosity and more like ignorance. [More here.]

Another approach is to place faith in the private insurers, some of which are attempting new, though uncertain, innovations akin to the public-sector ACO approach. (See Michael Chernew, Robert Mechanic, Bruce Landon, and Dana Safran [4], about which I blogged here. More on private-sector ACOs in tomorrow’s post.)

Or we could be honest and say we don’t know how the US health care spending problem will be solved or when. This is a double uncertainty, on both technical and political levels. It’s expressed in the following chart by Tom Getzen (more health care spending charts here): 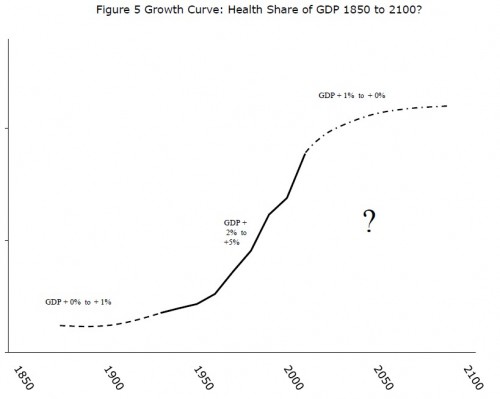 One thing that is certain: The ACA is not enough. If bending the cost curve is the goal, we need more reforms. We need more innovations. Emanuel is right, we need more than 1% or even 1.5% savings.