Why it would be hard, and painful,to cut Medicaid

Given the discussions recently on the need to cut entitlements, and the inability to recognize so much spending as entitlements, it’s inevitable that eventually we will get back to discussing how we need to cut Medicaid. Every time someone suggests doing so, though, I start to cringe. I’ve long argued that Medicaid is almost the ultimate safety net program. It’s health care for people who need it and can’t afford it. It’s hard to abuse, after all. You can’t buy cigarettes or cake with it. It’s just reimbursements to practitioners.

But that’s not the whole story. For that, we need to look at some data. Let’s start with how Medicaid spending is distributed among different groups: 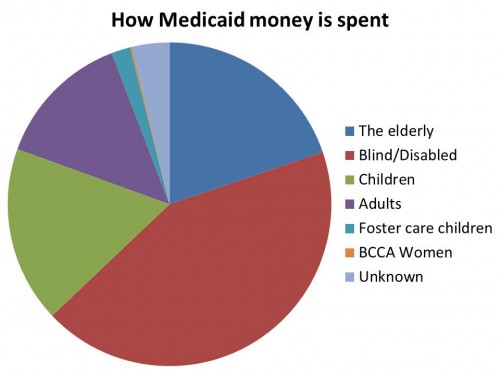 The biggest share of the pie, or the greatest percentage of Medicaid money, is spent on the blind and disabled. It’s going to be difficult, if not impossible, to cut care from that group. The next largest share of Medicaid goes to the elderly. Yes, even after they get Medicare, the very poor among those age 65 or older also get Medicaid. We call them dual-eligibles. Does anyone think that we’re going to cut from seniors after the 2010 elections? Unlikely. Should we cut from kids in foster care? Or perhaps “BCCA Women”, or women who are getting breast or cervical cancer assistance. No?

That pretty much leaves children or adults. Let’s own that it’s more difficult, politically, to cut spending on children (although it is possible). So it’s probably going to fall on adults.

There are two problems with that. The first is that Medicaid is already pretty crappy for non-elderly adults. If you don’t have kids, then in the majority of states in the US, it does not matter how poor you are, you can’t qualify for Medicaid. Even when you can, it’s pretty hard. And lots of adults on Medicaid are pregnant women. Should we cut from them?

The second problem is this: 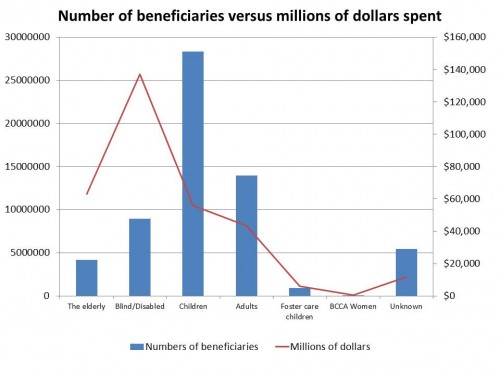 I’ve graphed the number of beneficiaries in the bars and the left-hand y-axis. The red line and the right-hand y-axis are the numbers of millions of dollars we spend on each group. As you can see, although we spend a ton on the blind, disabled, and elderly, there are relatively few of them on Medicaid. Kids, on the other hand, are very numerous, but cheap. So are the adults.

Let’s look at this one final way: 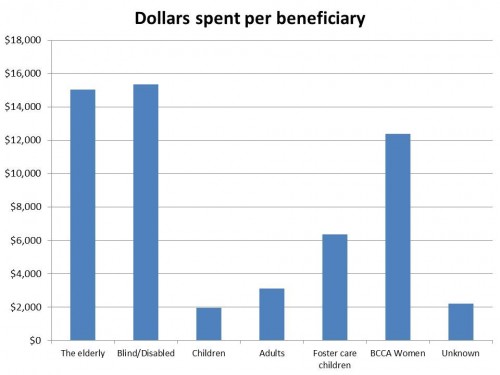 This is the amount spent per beneficiary in each group. As you can see, the amount we spent per blind or disabled person, or per elderly person, is much, much more than the amount we spend per child or adult. This means that if we really want to cut Medicaid spending, and we want to do it on the backs of adults or children, we will have to drop many, many more of them to make a real impact on spending.

So what will we do? Should we cut some of their benefits instead? Again, look how little we already spend on children and adults. If we cut spending on every child and every non-elderly adult by 25%, that will reduce overall Medicaid spending by less than 8%.

Or do you want to go after the money we spend on the blind and disabled? Women with breast cancer or colon cancer? The elderly? Until I hear some specifics, I’ll continue to look at the idea with skepticism and dismay.

UPDATE: Please also remember that when you recommend cutting spending, you’re also recommending cutting reimbursement. Physicians already complain that payments are too low in Medicaid, and lots of people like to demonize Medicaid for underpaying docs. They say it means too few physicians will accept it. That will also get worse if you cut Medicaid.