What’s Happening with Medicare Advantage and Why it Matters

For over 50 years, Medicare has provided affordable health insurance to hundreds of millions of people. At present, almost 62 million individuals depend on the public program to help cover the costs of medical services including hospitalizations, physician visits, prescription drugs, preventive services, and nursing facility or home health care.

But it doesn’t cover everything. Most Medicare beneficiaries rely on additional supplemental insurance beyond traditional Medicare. This additional insurance commonly consists of employer retiree benefits, privately purchased Medigap policies, or Medicaid for people with low income.

This is where Medicare Advantage comes in. Today, over 24 million Medicare recipients needing fuller coverage then what Medicare has to offer, instead enroll in more robust private plans obtained through Medicare Advantage. These managed care programs offer an expanded list of benefits at a fixed cost compared to Medicare, for which needed services may not be covered at all or come at a high price.

Enrollment in Medicare Advantage has rapidly grown since its implementation, from 18% of Medicare beneficiaries enrolled in 1999 to 39% in 2020. This growth, however, has not always been healthy.

Being a private market, Medicare Advantage plans behave differently than traditional Medicare. Any program, private or public, must maintain profit to stay afloat, but a number of Medicare Advantage plans were initially riddled with aggressive marketing tactics and lacked government oversight to protect consumers. Some companies hired revenue maximization experts, who went beyond ensuring earnings, and encouraged private insurers to engage in questionable marketing tactics that weren’t always in the best interest of the consumer.  In the early days, a large number of beneficiaries were enrolled without a full understanding of the program or its disadvantages, and consumer satisfaction was low. 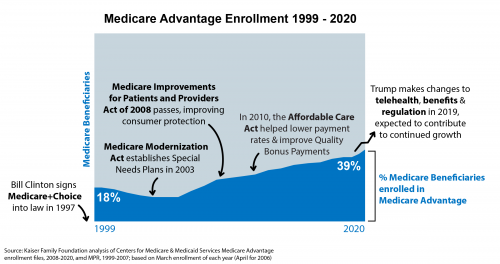 Government regulation eventually caught up, establishing means to curtail any predatory practices in Medicare Advantage marketing when the Medicare Improvements for Patients and Providers Act was passed in 2008. The legislation strengthened government oversight over Medicare Advantage sales activities and consumer satisfaction has since improved, reaching a record 94% satisfaction in 2019.

Bipartisan support for the program continues to foster steady growth no matter the political party of the sitting president, but how much growth and whom that growth most benefits — consumer or insurer — depends on which policy levers that administration pulls.

Where to go from here…

The Biden administration is now left with the responsibility to manage continued growth while reining in the regulatory loosening that occurred under the prior administration. This administration should prioritize regaining regulatory control over risk adjustment practices and refocus policy decisions towards value-based care and consumer protection rather than policies that favor the facilitation of sales.

For example, although it may sound entirely beneficial to consumers that Trump expanded the list of benefits covered by Medicare Advantage plans, it can also be interpreted as a move to simply increase profit, especially if the value of these newly permissible services to the consumer cannot be demonstrated. The Biden administration will need to balance the complexities of private plans so that they best serve the public.

Medicare Advantage stands today as a more effective and stable program than when it was born. It is a powerful means for Medicare patients to get more value out of their spending and to maximize benefits. Moving forward, the government’s regulatory relationship with the program will need to ensure that as more people enroll, it doesn’t result in more consumers, or the government itself, being taken advantage of.

Tasha McAbee (she/her) is an MPH student at Boston University School of Public Health studying Health Policy and Law. She is also a professional medical illustrator/animator and enjoys educating through design and visual media.