What makes the US health care system so expensive – Inpatient Care 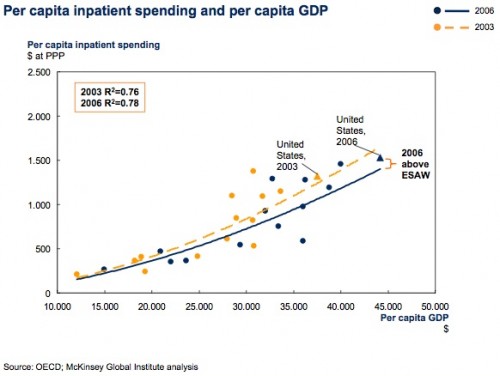 Now one of the reasons this number isn’t as high as you might expect is that the United States shifts more of its care to an outpatient setting than other countries (I’ll talk about that tomorrow).  This does result in some cost savings for us.  Additionally, we spend fewer days in the hospital than people in other countries (121 admissions per 1000 people per year US versus 179 OECD average).  We also spend less days in the hospital for each admission, averaging 5.6 days versus 6.9 in other countries.  But then we go and blow it by spending way, way more per hospital day ($2271 versus $920).

We also perform more than 25% more procedures than other countries, on average.  In fact, the increased numbers of percutaneous coronary interventions, knee replacements, coronary bypasses, and cardiac catheterizations alone accounts for an extra $21 billion in additional inpatient costs.  These procedures also increase the use of medical devices.  And, since no one gets spared in this series, we have to acknowledge that medical devices cost more in the United States than in outer countries.  In fact, we spend about $26 billion more than you would expect we would for such devices, given our wealth.

The way we organize our hospitals doesn’t help, either.  Hospitals in the United States are smaller on average than those in other countries, and also are usually less filled than those in other countries.  Because each hospital has significant fixed costs such as machinery, administration, and upkeep, this results in costs that are higher than you would expect for our wealth.  This factor alone gives us $11 billion in extra costs.

I grant you that the absolute amount of our extra spending on inpatient costs shows it isn’t the biggest offender.  But our organizational structure for inpatient care isn’t easily defensible.  If you want to defend, so be it.  I don’t think there’s a clear argument that involves better outcomes, but I hope I can be shown wrong.  If not, if you’re serious about improving the cost curve, as well as outcomes, you have to include inpatient care in any discussion of system reform. 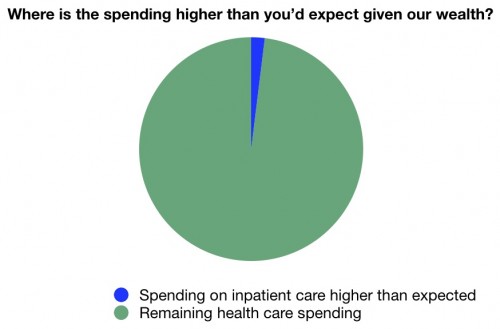