Some of you have been eagerly waiting for this one.  Our health care system is a bloated, bureaucratic mess.  You won’t get an argument from me.  All together, administration and insurance totaled $145 billion in 2006, accounting for 7% of all health care spending.  We spent $486 per person, which is almost twice what the next country spent.  As most of you expect, the majority of that spending is above what you would expect, given our wealth: 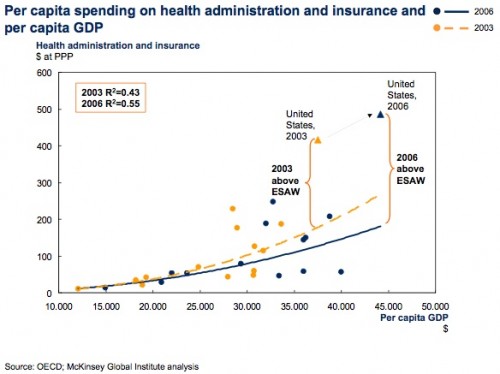 In fact, $91 billion dollars were spent in 2006 above what you would expect.

Now this total includes both public and private administration. On the public side, there is the cost of administering Medicare, Medicaid, the VA, and other programs.  On the private side, this includes profits, taxes, and various administrative expenses.  Private insurance accounts for about two-thirds of this, though, at $63 billion in “extra” spending.  Some of that is profit, of course, but not as much as you’d think.  More than half of the “extra” spending done by the private insurance industry is for selling, general, and administrative expenses.  About one third of that money is for sales and marketing alone.

We’re not giving a pass to the government, though.  $28 billion more is spent than you’d expect for public spending on administration and insurance.  There’s room for improvement there as well.  However, it is important to note that Medicare Part D, which is, you’ll remember, public payouts to a privately administered insurance system, was responsible for an increase of $8 billion in 2006 alone.  So even in the public sphere, private administration results in a lot of “extra” spending.

Based upon an objective look at systems around the world, there is no doubt that an increasing amount of private administration of insurance is more expensive.  However, given the amount of private insurance as a share of spending, you’d actually expect to see more spending than we do, perhaps up to $19 billion more.  Therefore, an argument can be made that some private competition in the US may be bringing down costs.  The question is whether this benefit is overshadowed by the much larger inefficiencies we see in overall private administrative spending.

This is especially concerning because, unlike in other categories, it’s hard to rationalize how spending more in this category is doing us any good.  I can understand arguments for more money for drugs or doctors or actual care.  But for administration?  For bureaucracy?  I’d love to hear why this spending is cost-effective. 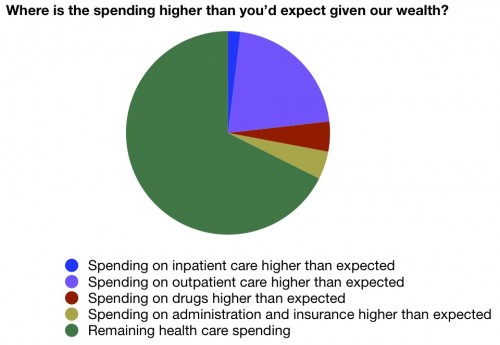