That’s a question Aaron and I asked after he posted this figure: 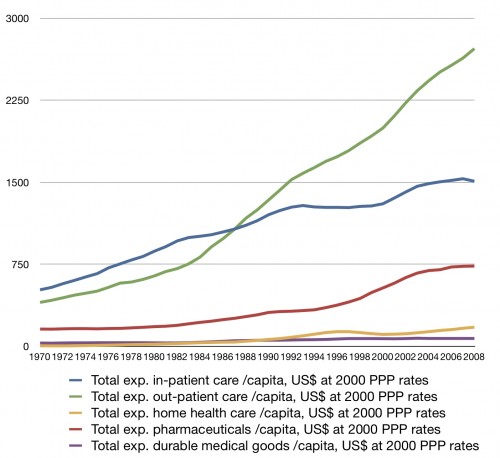 Outpatient spending took off around 1983. What caused it to grow and why 1983? A shift in the proportion of surgeries from the inpatient to the outpatient setting and an increase in ambulatory treatment seems to be the general answer. I posted a graphic related to this before, but it didn’t go back far enough. Here’s one that does, from the AHA:

That’s a very dramatic shift, starting at least as early as 1980. (I wish I had a figure that went deep into the 1970s.) OK, so we’ve documented something was encouraging outpatient care and discouraging inpatient care. But what?

The temptation is to point to the Medicare inpatient prospective payment system (PPS). It was implemented in 1983 so can’t explain what happened before then. Yet, 1983 is about when outpatient spending started growing faster than other types of care. Case closed?

Not so fast. The PPS was phased in over several years and didn’t really bite until the later in the 1980s. I’m not making that up. It’s in the literature (see Rick Mayes’ work). I’ll illustrate this claim in another post, but not soon (you are rewarded for your loyalty).

What else does the literature tell us? Reader Rob shared a 1991 paper by Margaret Sulvetta that has a few clues. Her answer is twofold. First, about the late 1970s and 1980s she writes,

Technological advances in surgery and anesthesia have enabled grater numbers of procedures to be performed safely on an ambulatory basis.

Second, hospital cost containment did not begin with PPS but started in earnest with the 1982 Tax Equity and Fiscal Responsibility Act (TEFRA).

TEFRA provisions limited both the increase in Medicare payments and the level of payments. The increase in payments was restricted to an amount equal to the increase in the hospital market basket plus 1 percent. TEFRA also […] limitted [payment] to 112 percent of the average payment for similar hospitals. […]

Payment limits were set on a per discharge rather than a per diem basis. […]

Hospitals with costs below both limits […] received one-half the difference between the lower of the two limits and actual costs. […]

TEFRA provisions were successful in controlling overall Medicare expenditures; it is estimated that TEFRA saved Medicare $6 billion in fiscal years 1983-85.

Per discharge payment and bonuses for low-cost both would have encouraged shorter stays and shifts to the outpatient setting.

I’m satisfied with these answers. But you need not be. Feel free to keep explaining health care payment history. It’s hard to search the old literature and the dialog I’m having with readers of the blog seems to be the most efficient way to learn about this stuff.