Want to know why physicians do too much? Here’s your answer.

Once in a while, a study needs no introduction. “Medicare Payment for Cognitive vs Procedural Care: Minding the Gap“:

Importance  Health care costs in the United States are rising rapidly, and consensus exists that we are not achieving sufficient value for this investment. Historically, US physicians have been paid more for performing costly procedures that drive up spending and less for cognitive services that may conserve costs and promote population health.

Objective  To quantify the Medicare payment gap between representative cognitive and procedural services, each requiring similar amounts of physician time.

We talk all the time about specialty care and primary care, and fee-for-service versus salaries physicians. But these are abstractions. What we want are data. Here you go.

So what this study was trying to do, basically, was to determine how much of a difference there might be between an hour spent doing primary care versus an hour spent doing cognitive care. Research shows that it takes about 13.5 minutes to do a colonoscopy, and 14 minutes to do a cataract extraction. Throw in another 10 minutes to review the medical record, talk to the patient’s family, and do your documentation. Then use CMS wRVU numbers to calculate how much you make per hour of work. You can do the same for cognitive services: 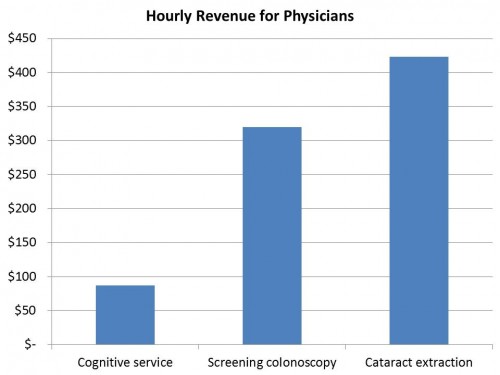 If you’re a slow proceduralist, and it takes you the longest published times for performing these procedures, you can still make 2-3 times what you could make per hour doing cognitive care. But here’s where it gets a little sketchy. The wRVU multipliers and the calculations by which Medicare determines how much to pay for stuff is set by the Relative Value Scale Update Committee (RUC). They use their own estimates of time to calculate how much docs should be reimbursed for various services. Here’s that same chart above, but with the RUC estimates instead of published estimates: 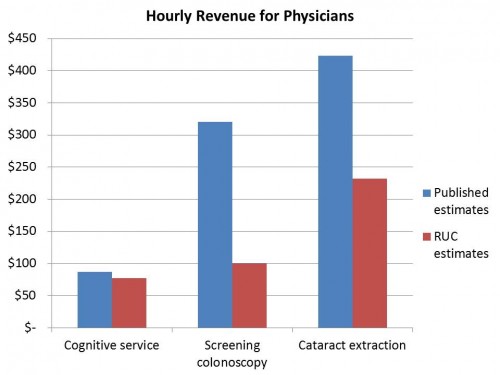 Let me be clear: the red bars are what the RUC estimates a physician could make in an hour, and the blue lines are what published data estimate a physician could make. The gap between RUC estimates and published data are much, much closer for cognitive services than the procedures. Why such a difference? Well, if proceduralists overestimate how much time it takes to do a procedure, then they can actually do more of them in a day, and make up in volume what they can’t in reimbursement per procedure. They can do more of them than would be thought given RUC estimates. It’s not like there’s a bias towards proceduralists on the RUC, is there? Emphasis mine:

The RUC has 31 members, 22 of whom are appointed by national medical specialty societies, 5 of whom are appointed by the American Medical Association or its representative bodies, and 4 of whom are 2-year rotating members, with one of these positions reserved for a primary care representative. Thus, although PCPs constitute nearly half the physician population, they represent only 16% of the voting members of the RUC. A detailed review of the RUC process is beyond the scope of this report, but that process has significant methodological limitations. The RUC method uses self-reported times for services in which the purpose of the survey (to establish payment rates) is known to the respondents who stand to benefit by inflated estimates. McCall et al found that RUC survey data overestimated the procedural time by an average of 31 minutes across 60 procedures when compared with objective data from operative logs.

A detailed review of the RUC process is beyond the scope of this post, too, but it’s been in the news a lot lately. The process needs some serious re-consideration. Read Austin here, here, and here.